The High Republic: A New (Old) Era in Star Wars!

Earlier this week Lucasfilm announced a brand-new era of Star Wars books and comics that will be arriving soon: The High Republic. Set approximately 200 years BEFORE The Phantom Menace, this era has never before been properly explored. Now it will be the time-frame for numerous books and comics!

“Star Wars: The High Republic features the Jedi as we’ve always wanted to see them — as true guardians of peace and justice. This is a hopeful, optimistic time, when the Jedi and the Galactic Republic are at their height. But of course, into this glorious new era something wicked this way comes,” says Lucasfilm publishing creative director Michael Siglain. “This initiative will give readers young and old a new corner of the galaxy to explore through rich, meaningful stories. Plus, readers will learn what scares the Jedi.”

So far only the first wave of stories has been announced but already there's plenty of cause for excitement for young Star Wars fans:

Into the Dark (Disney/Lucasfilm Press)
From Claudia Gray (Lost Stars) comes the mysterious Young Adult novel of Padawan Reath Silas, stranded on what appears to be an abandoned space station...at first.

A Test of Courage (Disney/Lucasfilm Press)
From Justina Ireland (Spark of the Resistance, Lando's Luck) comes the middle grade novel about a teen Jedi Vernestra Rwoh, a young Padawan, an audacious tech-kid, and the son of an ambassador who are stranded on a jungle moon where they must work together to survive both the dangerous terrain and a hidden danger lurking in the shadows. 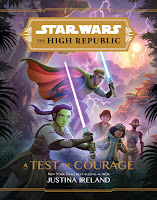 The High Republic comic series from Marvel Comics will begin written by Cavan Scott, one of our favourite current Star Wars writers! He has written several of the Adventures in Wild Space books, as well as the Choose Your Destiny titles, numerous Star Wars Adventures comics and Dooku: Jedi Lost!

Details are still pretty sparse at the moment but other titles will be announced soon from this exciting new era!
Posted by Star Wars Kidscast at 9:21 PM