Read, You Must: Adventures in Wild Space: The Snare 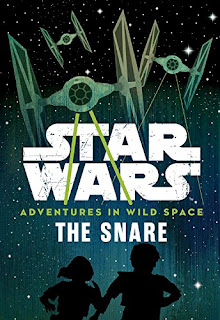 “Two Kids Take On the Empire”

Adventures in Wild Space is an exciting new series of middle-grade chapter books from Lucasfilm-Disney Press. First published in early 2016 by Egmont UK, this series is now becoming available for North American readers.

Set between the end of the Clone Wars and the rise of the Rebellion (basically between Episodes 3 and 4), these exciting stories focus on brother and sister Milo and Lina Graf. The kids are searching deep in space for their missing parents - explorers who were captured by the Empire!

The first book, The Snare by Cavan Scott introduces the young siblings and their life on the run from Imperials. They live aboard their own spaceship, The Whisper Bird, with a droid companion CR-8R (aka. Crater) and Morq, a Kowikian Monkey-Lizard pet just like Jabba the Hutt had.

As the series title suggests, these stories take place in “Wild Space”, areas of space far beyond the well-known Star Wars galaxy, so there will not be so many familiar characters or planets as readers may be used to. However there is plenty of humour and adventure here (and one very well-known character near the end!) as the kids outwit and outrun the evil Imperial Captain Korda.

The brother-sister relationship and constant scrapes with danger makes this book feel a bit like the fun Star Wars: Galaxy of Fear books from the 1990’s, but with less spooky stuff. Although there is a fair amount of creepy grossness in The Snare. Be prepared to encounter the horrible “wart-hornets”!

It might’ve been funny to call this book “It’s a trap!” since that means the same thing as snare, but it’s probably good they didn’t.

One confusing thing about the two books currently available here (released on the same day) is nowhere on the covers does it say which is book one or two! The only way to know which book to read first is on the last page in The Snare it says “To be continued in Star Wars: Adventures in Wild Space Book Two: The Nest”. I admit I only discovered this after looking it up online to know where to start.

Potentially adding to the confusion of where to start, there is also a shorter “Prelude” book called The Escape that sets up the events of The Snare. The Escape is currently only available in eBook format in North America but is a paperback in the UK.

Minor confusions aside, author Cavan Scott has started off the Adventures in Wild Space series with fun, fast-paced adventure in The Snare and the series looks like it will be an exciting ride for young readers. 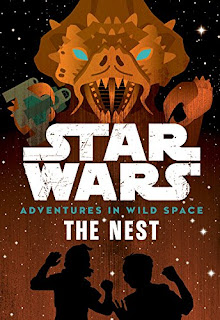 Coming in April: Book Three: The Heist (aka The Steal) 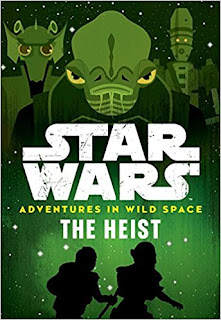 Posted by Star Wars Kidscast at 9:59 AM