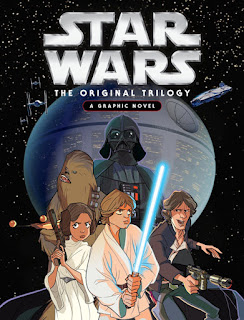 Most Star Wars books are great so it’s hard to review so many of them without being repetitive. I love books and I love Star Wars, so putting them together usually results in something special. Sometimes the books are even fantastic. Occasionally though, a book comes out that really should be on EVERY Star Wars fans’ wish-list. A “must-have”.

Star Wars: The Original Trilogy – A Graphic Novel is a must-have book! It is wonderful.

Star Wars: The Original Trilogy – A Graphic Novel from Disney-Lucasfilm Press is a faithful adaptation of Episodes 4, 5 & 6 (aka The Original Trilogy) into comic form bound in one amazing 208 pg. hardcover collection. It is as suitable for younger Star Wars fans as the movies themselves but offers plenty to enjoy at any age. There have been many books that retell the story of the films “for a new generation” but this one really stands out. 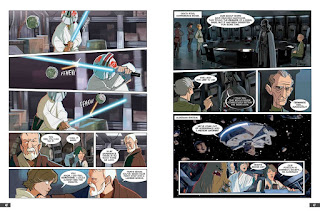 Past comic and novel adaptations of the films have usually been released around the same time as their corresponding movie, so to get them out on time they have been created based on early versions of the scripts. This usually results in scenes not in the movie, key moments missing and overall minor differences in the dialogue throughout. This kind of thing really bothered me as kid; “That’s not what Luke said!” “That’s not in the movie!” I’d say.

In this case thankfully the creators felt no need to change the script as we know it from the classic movies. I could easily hear the characters and famous lines in my mind as I read along. A few minor scenes were left out of these books but what is here is Star Wars greatness! 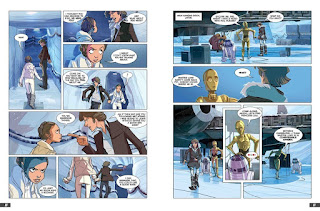 The new treat here the amazing artwork. This graphic novel is very modern in its style, presenting Star Wars in a way that would be very appealing to kids who read the popular Bone or Amulet series’ or enjoy shows like Avatar: The Last Airbender. Some of the panels look like they’re from a Star Wars 2-D animated show or movie, which would be amazing to see! There hasn’t been much Star Wars 2-D animation since the original Star Wars: Clone Wars “micro-series” from 2003-2005. This book makes me wish there was much more!

Words like beautiful, exciting, and absolutely cool are the words that best describe the artwork, created by a very talented team. If you know the story (if you’re reading this you likely do) then you already know how awesome THAT is! 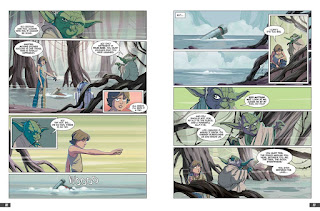 Still not convinced? At a very reasonable price of $19.99 or less, this retelling of Episodes 4 - 6 belongs in EVERY Star Wars fan collection

Even better – the final page promises more of these graphic novels coming for Episodes 1 – 3, The Force Awakens and beyond. Yes, please!

(Publisher's Recommendation: Ages 8+ )
Posted by Star Wars Kidscast at 12:23 AM