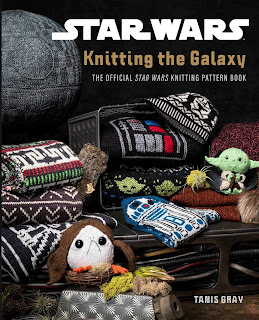 Normally we stick to reviewing children’s or younger reader books here, occasionally dabbling in “all ages” titles and even “Young Adult”.  Then from Insight Editions (publisher of last years’ very cool The Secrets of the Jedi) comes Star Wars: Knitting the Galaxy by Tanis Gray!
Knitting the Galaxy is none of the above. It’s not specifically for kids, but kids could sure benefit from someone in the family making these items! It would be fun for kids to look through and make requests, but even the beginner patterns look somewhat challenging.

Admittedly I don’t even know how to review this book. I know nothing about knitting. I honestly couldn’t say if it’s easy-to-follow or even helpful for knitters. Having said that, there’s plenty to appreciate for non-knitters here in this 208 page hardcover.

The “28 official patterns” for knitting projects are divided into the categories of Toys, Costume Replicas, Inspired Apparel and Home Decor. There is also a Glossary and “Yarn Resource Guide”. Each project is ranked one to three lightsabers, depending on skill level. Looking through it there do seem to be very few “Beginner” projects. 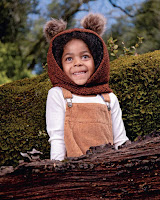 In Toys, knitters can make Pocket Yodas, Porgs and more. In Home Decor there’s blankets, pillows and other ideas. The Costume Replicas are cozy warm renditions of character items like Rey’s Vest and Padme’s battle wrap. The Inspired Apparel section is the biggest with plenty of mittens, socks, pullovers, scarves and more, all of which would be pretty amazing hand-made gifts for Star Wars fans young and old. 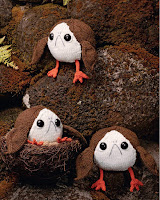 What must be said about this book is that it's absolutely gorgeous! The photography of the finished projects is terrific and very Star Wars-y. Peppered throughout the book are iconic Star Wars images of the characters and moments that inspired each project.

There’s also behind-the-scenes trivia and more to keep non-knitters entertained. One special treat is on page 176, the clearest, coolest picture of Darth Maul (as he appears in Solo: A Star Wars Story) you’re likely to find anywhere.

This book will make Star Wars fans want to learn how to knit, or want to find a family member or friend who does! 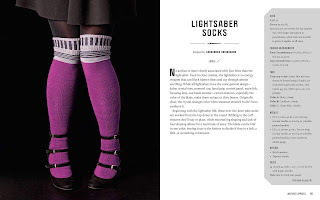 Posted by Star Wars Kidscast at 10:20 PM No comments: 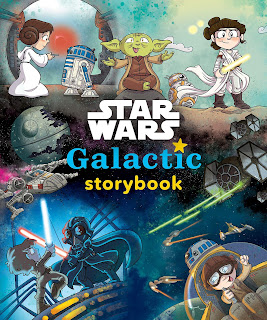 From Episode I: The Phantom Menace to Episode IX: The Rise of Skywalker, the major events of the lives of Anakin Skywalker, Leia, Luke and Rey are all captured here in an age-appropriate, adorably illustrated way.

Author Calliope Glass and illustrator Katie Cook have previously collaborated on several fun Star Wars books for kids including ABC-3PO, Search Your Feelings and Creatures Big and Small. While those books all use rhyming poetry, Galactic Storybook tells the story in a more straightforward, narrative way.

As usual Katie Cook’s illustrations are light-hearted and incredibly cute. Even Jabba the Hutt is cute here!

Galactic Storybook is divided into six chapters or stories:

Combining The Force Awakens with The Last Jedi makes sense as those movies flow right into each other, whereas combining the entire prequel trilogy into one story may be a little confusing to some young fans, depending on how familiar they already are with the movies.
If you want a good recap of the entire Skywalker saga, or a cuddly way to present the stories to a youngling, Galactic Storybook is a great addition to your library!
Posted by Star Wars Kidscast at 5:48 PM No comments: 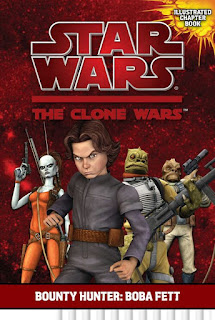 With the popularity of The Mandalorian there has been a renewed interest in the mysterious character that introduced the infamous and iconic Mandalorian armour to Star Wars so long ago.

Boba Fett has captured the imaginations of Star Wars fans since his animated on-screen debut in The Star Wars Holiday Special back in 1978. His appearance in 1980’s The Empire Strikes Back was limited but had a huge impact on audiences. Suddenly Darth Vader wasn’t necessarily the coolest bad guy in the galaxy! That armour was just so cool, and he barely speaks but you know he means business. And he dares to talk back to Vader!

While it may have appeared that the notorious bounty hunter died in the belly of the horrifying sarlaac creature in Return of the Jedi, there has always been speculation of how that armour could have saved him. Maybe he blasted his way out? Maybe he killed the sarlaac? Fans loved the character so much that many created their own storyline of how Boba Fett could have plausibly escaped.

Knowing the ever-growing popularity of the character, Star Wars creator George Lucas made young Boba and his father Jango into key characters in 2002’s Attack of the Clones. That’s when fans learned for the first time that Boba is a clone of his father, that bounty hunting is the family business, and that Boba has a very good reason to dislike the Jedi.

What happens next for young Boba Fett was originally explored in a series of six middle-grade chapter books from Scholastic publishing. While entertaining and still fairly easy to find, these stories are not the official story of Boba Fett and are now out of print.

When The Clone Wars was in its second season, young Boba Fett was introduced into the animated series in 2010. Once again Boba Fett was on the small screen, animated just as he had debuted almost 32 years earlier! Unlike the earlier novels, those seven episodes are part of the official Star Wars chronology, or “canon”, and expand on the story of the vengeful youth and his loathsome bounty hunter mentors. 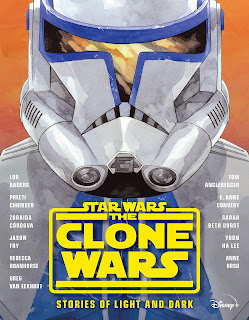 Anyone wanting to know the whole story of Boba Fett would be well-advised to watch those episodes. Several of them were adapted by frequent Star Wars author Jason Fry (The Weapon of a Jedi) into the illustrated chapter book Star Wars: The Clone Wars Boba Fett: Bounty Hunter in 2010.

While not entirely in sync with the official Star Wars chronology, 2013's The Bounty Hunter Guide is also an excellent read for fans of The Mandalorian and Boba Fett.

More recently, some of Boba Fett’s young appearances on The Clone Wars were adapted into short stories in the 2020 collection Star Wars: The Clone Wars Tales of Light and Dark.

However you dive into the story of the fearsome bounty hunter Boba Fett, there may be more to the story than you realize. There’s probably plenty more to come too! Without spoiling too much, Boba Fett fans really need to check out The Mandalorian!

Posted by Star Wars Kidscast at 11:06 PM No comments:

In February, Lucasfilm announced a forthcoming new era in Star Wars storytelling to be known as The High Republic. This new series of stories would all take place approximately 200 years BEFORE any previous canon Star Wars stories we've seen so far.
This is the era of the Jedi in their prime as peacekeepers, long before the Clone Wars and the rise of the Empire. (Learn more here)
Now only weeks away from release, here are some more details about the first two High Republic stories of most interest to younger readers. Both are scheduled for release in North America on January 5, 2021. 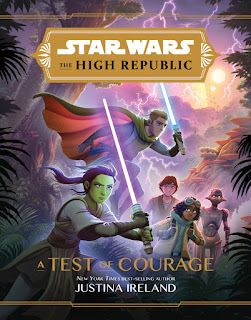 A Test of Courage by Justina Ireland (256 pages 8-12 yrs)
"Vernestra Rwoh is a new Jedi Knight at age sixteen, but her first real assignment feels an awful lot like babysitting. She's been charged with supervising twelve-year old aspiring inventor Avon Starros on a cruiser headed to the dedication of a wondrous new space station called Starlight Beacon.
But soon into their journey, bombs go off aboard the cruiser. While the adult Jedi try to save the ship, Vernestra, Avon, Avon's droid J-6, a Jedi Padawan, and an ambassador's son make it to an escape shuttle, but communications are out and supplies are low. They decide to land on a nearby moon, which offers shelter but not much more. And unbeknownst to them, danger lurks in the forest?"
Justina Ireland is the author of Spark of the Resistance and Lando's Luck. 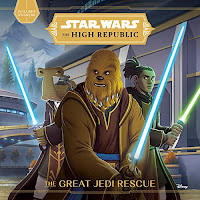 The Great Jedi Rescue by Cavan Scott (24 pages 5-8 years)
"Meet the noble and wise Jedi of the High Republic!
When a disaster strikes in hyperspace, putting the people of Hetzal Prime in grave danger, only the Jedi of the High Republic can save the day!"
Cavan Scott is the author of several of the Adventures in Wild Space novels as well as the Choose Your Destiny books.
Looking forward to this new era? Have a story in mind you hope to see? Comment below!
Posted by Star Wars Kidscast at 3:25 AM No comments:

Read, You Must: The Star Wars Book 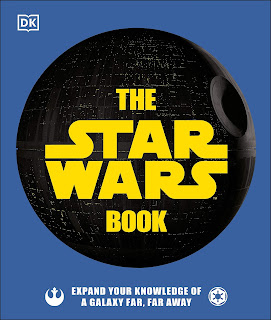 DK Publishing has for been creating amazing guidebooks for Star Wars fans for nearly 25 years. From Star Wars Encyclopedia, to Star Wars Year By Year, each sounds like it’s the final, definitive book, THE book for Star Wars lovers.

In 2015 alone they published Star Wars: Absolutely Everything You Need to Know AND Ultimate Star Wars!

All the above titles are wonderful, must-have books but Star Wars is an ever-expanding galaxy of stories and characters, planets and aliens, spaceships and droids, and a LOT of Star Wars has happened since 2015!

Which leads us to the brand new guide book, simply titled The Star Wars Book. The subtitle “Expand Your Knowledge of a Galaxy Far, Far Away” holds true as even the most dedicated fans will probably find some new information in here. 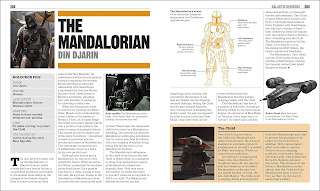 As the Skywalker Saga has ended and The Mandalorian is the main new Star Wars story coming out right now, and before the launch of the High Republic era, this is a great time to capture the story so far, in so many facets.

The Star Wars Book looks at all aspects of the saga as they relate to the bigger story. Where the Visual Dictionary books simply look at one film at a time, The Star Wars Book draws connections between books, comics, tv and video games and how each aspect relates to the bigger picture. A topic like the Force might refer to moments from the movies, episodes of The Clone Wars and Rebels, novels and more. 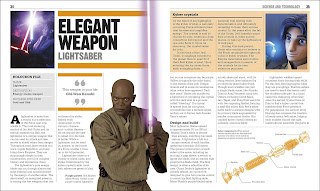 Authors Pablo Hidalgo (Rogue One: The Ultimate Visual Guide, The Rise of Skywalker Visual Dictionary, and many more), Cole Horton (Absolutely Everything You Need to Know) and Dan Zehr compile each subject into easy to read but insightful segments.

Zehr (aka Dan Z) is a first-time Star Wars author here, but longtime host and co-creator of the popular Star Wars fan podcast Coffee With Kenobi, a teacher and a very positive face in the fan community. Its great to see him contributing officially!

The are many wonderful Star Wars books, but only one that bears this title. Do yourself a favour and get the book, The Star Wars Book! 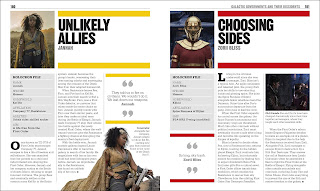 Posted by Star Wars Kidscast at 10:38 PM No comments: