Read, You Must: Creatures Big and Small 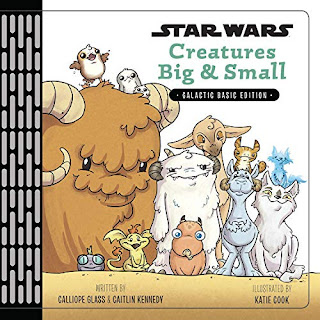 The creative team that brought us ABC-3PO, Obi-One, Two, Three and Seach Your Feelings, is back with Star Wars: Creatures Big and Small, a collection of entertaining poems from Disney/Lucasfilm Press introducing young readers to the exotic alien creatures of the Star Wars galaxy.

Starting with smaller beings like Porgs and tookas up to tauntauns, rancors, reeks and then to the truly massive space slugs and more, this 48-page collection highlights creatures from all of the Star Wars movies from The Phantom Menace up to The Last Jedi (except for Rogue One's mysterious Bor Gullet, sorry).

Author/Poets Calliope Glass & Caitlin Kennedy create light-hearted rhymes for each creature, some answer questions and some are cheeky "warnings" about the dangers a creature poses. There's really no cute and cuddly take on Corellian Wolf Hounds, for example. 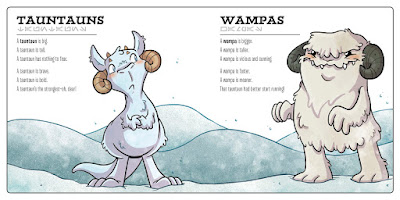 As usual, Katie Cook's extremely adorable illustrations add a whole other layer to the lightness of tone.

Fans of Star Wars Rebels and The Clone Wars will recognize many of these creatures that may be new to other fans. Yay Puffer Pigs! 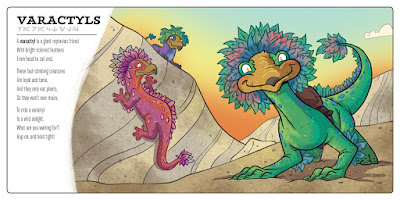 There have been many books about Star Wars creatures in the past (see below) but for big OR small fans looking for a fun first look at some of them, Creatures Big and Small is a great start. 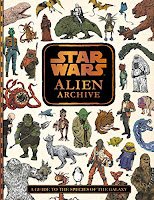 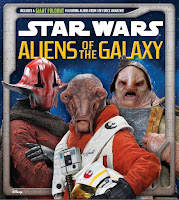 That introduction to the first Star Wars movie in 1977 (and each one since) was always meant to sound a lot like the classic fairy tale beginning "Once, upon a time..."

Star Wars always has been more like a fairy tale in space than pure science fiction. A new middle grade book from Disney/Lucasfilm Press takes that idea even further.

Imagine you're a kid in the Star Wars galaxy - what would your bedtime stories be like? What kind of stories did Luke Skywalker grow up with? Or after the Empire collapsed, what stories do those fathier stable kids in The Last Jedi hear, read and share?

Unlike most Star Wars books, this is written and presented as "In-Universe", as though it's actually a book of folklore you could buy on Coruscant or Naboo for a child. The stories are set in the Star Wars galaxy we know, but talk about it as though it's far in the past. They feel very much like they've been told many times, passed down to younger generations, and author George Mann has just finally written them down. Details are sketchy and descriptions are exaggerated, but readers will enjoy separating the likely facts from the creative embellishments.

One character, known only as the "Dark Wraith", haunts people with his flashing red arm and horrible rasping breath. We know this is probably about Darth Vader & his red lightsaber, but the teller of the tale doesn't know that name or even what a lightsaber is.

While some of the stories are perfect for "bedtime stories", others may be a little bit scary at times. Such is the nature of fairy tales, and author Mann does not shy away from this. In fact some of the stories like "The Witch & the Wookiee" feel like they come straight out of Grimm's Fairy Tales, just adapted into the Star Wars galaxy. Even the language Mann uses feels quite old-fashioned at times with many vocabulary-building words that may be a good challenge younger readers (or their parents!).

Like many early 20th century books for kids, the illustrations are sparse but beautiful. Each story has one incredible painting by Grant Griffin. Some of them are stunning and every one of them could be a framed poster in any Star Wars fan's room.

The title is a little odd as there really aren't any fables here (stories that typically have animals as the main characters) and a more appropriate title would've been Myths & Legends, or even "Tales from a Galaxy Far, Far Away" but that title has already been used for a different collection of short stories.

While a few of the stories are connected to each other really they could be read in any order. At least two of the stories take place on Batuu, which connect them to the events and locations of Disney Parks' new Galaxy's Edge Star Wars attractions. Visitors to the parks can come already knowing a bit about Black Spire Outpost and some of the spots within the locale.

This is a new kind of Star Wars book, and hopefully we'll see more in the future. In fact that may be the only disappointment in this book - it leaves the reader wanting more stories and more of the fantastic paintings. Highly recommended!

While not exactly the same thing, readers who enjoy Myths & Fables will probably also like The Legends of Luke Skywalker by Ken Liu, and also the aforementioned collection of short stories Tales from a Galaxy Far, Far Away: Aliens vol 1 by Landry Q Walker. 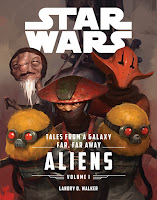 Posted by Star Wars Kidscast at 1:29 PM No comments: 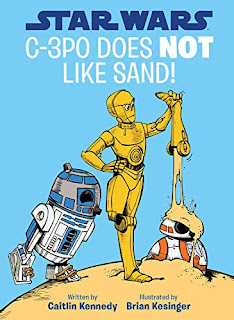 What happens when C-3PO, R2-D2 and BB-8 get sent on secret mission to Tatooine for the Resistance? A LOT, apparently!

As their mission is simply to "scan the planet", they stroll and roll across the desert encountering nearly everything you can remember from past adventures on Tatooine. Creatures, aliens, racers and more are among the fun surprises on each turn of the 64 pages.

Poor C-3PO grows more and more annoyed at every step with the heat, the two other droids, and especially the sand getting in all of his inner-workings.

This simple adventure story seems to be set after the events of The Last Jedi, based on the fact BB-8 is there and R2-D2 is back with them from his adventure with Rey.

Since Disney-Lucasfilm Press began creating Star Wars picture books they have been pretty wildly different from each other. From the beautifully painted BB-8 On The Run, to the adorable Chewie & the Porgs to the dark-yet-very-silly Are You Scared, Darth Vader?, there are now a small variety of stories to choose from for bedtime or anytime reading for very young Star Wars fans.

C-3PO Does Not Like Sand! feels more like a book from the 1970's than 2019 and creates a wonderful nostalgic feeling for adults reading it.

The story by Caitlin Kennedy and illustrations by Brian Kesinger give it a look and feel almost like a Dr. Seuss book, but also has a lot in common with classic Sesame Street Grover books like The Monster at the End of This Book.

Even more though, this book is a delight for fans of the 80's Droids cartoon TV series. It's very much the kind of misadventure seen regularly on that show, with a similar sense of humour.

The spine is the only place that does this but the book is identified there as a "Droid Tales" book. Let's hope there's many more Droid Tales to come, and hopefully with K-2SO or L3-37!

For those of us who grew up on Star Wars, C-3PO Does Not Like Sand! is a lot of fun to read with younglings, or just to enjoy ourselves.

Read, You Must: Alien Archive 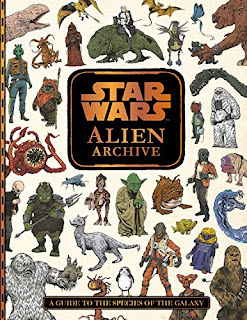 New from Disney - Lucasfilm Press is Star Wars: Alien Archive (A Guide to the Species of the Galaxy), an in-universe guide to nearly every alien species, from gigantic creatures like Rancors and Krayt Dragons to Jawas, Porgs, Tookas and well, whatever Yoda is!

Page after page of colourful illustrations, facts, and notable examples of each alien species fill this oversized 157 page hardcover. Basically anything that isn't a human and isn't a droid is probably covered in here somewhere.

The book is written in-universe, meaning the "author" is Xoddam Lothipp, Deputy Director of something called the "Graf Archive". The contents are presented as though this journal archive was discovered within the Star Wars galaxy.

Alien Archive has a very similar feel to 2016's Star Wars: Galactic Maps and works well as a companion to that book. Like in Galactic Maps, the all-new illustrations have an old-fashioned "wood cut" feel, once again by Tim McDonagh. It also covers some of the same ground as 2016's Aliens of the Galaxy, but it goes into far more depth and is about four times as long!

If you don't know an Ewok from an Ugnaught, is the book for you. Alien Archive is impressively comprehensive, including creatures and aliens from of course the Star Wars movies (as recent as Solo) as well as those only seen in The Clone Wars and Rebels.

A treat for the die-hard fans is also discovering creatures only seen in novels, comics, games or even from the Ewok adventure TV specials.

For most of the species presented there are notable examples given, hints as to where the reader may have seen this creature before. It would be nice to have some sort of footnotes to help readers find some of the more obscure species on screen or wherever they're from. However, since this book is in-universe, it doesn't really acknowledge that Star Wars IS a bunch of movies, TV shows and more. As far as the author is concerned, this is all real!

Longtime fans and brand-new fans of any age will find plenty to discover and enjoy in this archive. Highly recommended!