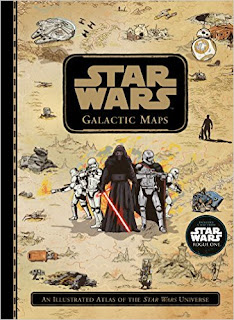 New from Disney/Lucasfilm Press comes one of the last Star Wars books released in 2016, and one of the best surprises of the year!

Galactic Maps: An Illustrated Atlas of the Star Wars Universe is a delight for fans of the whole Star Wars saga. Illustrator Tim McDonagh shines on every large-sized 2-page map spread as writer Emil Fortune (writing as archivist “Amel Fortoon”) tells the story of these newly-discovered “ancient” maps that “seem to be centred on the saga of the legendary Skywalker family”.

These aren’t ordinary maps though - each map is filled with character moments and action scenes based in that location. The illustration style harkens back to antique maps of the high seas (of Earth) and woodcut printmaking, giving the whole book a cool, old-fashioned look. Star Wars is, after all, set “a long time ago in a galaxy far, far away”.

Obvious important planets like Tatooine, Coruscant, Geonosis, Naboo, Jakku and Hoth are all here but over 80 pages, Galactic Maps also details locations seen only in The Clone Wars and Star Wars Rebels TV series as well.
As an added bonus there’s even some info and a map of Jedha from Rogue One. The various planetary systems are organized into groups and then categorized together by proximity. The book is admittedly more an artistic representation of each place rather than a collection of reliable topographical maps for navigation. Amel Fortoon warns at the beginning “these maps are not strictly accurate…the artist was more interested in the feel of these strange worlds and the galaxy-shaking events that took place on them.”


Each map spread is full of detail and in some cases sharp eyes are rewarded with tiny details to discover. With self-referential humour and surprise appearances of all sorts of lesser-known characters from Meebur Gascon to Dr. Vindi to the Gorax, Galactic Maps has a lot of fun with what could’ve been a pretty dry book.

Galactic Maps is part of a new trend in Star Wars merchandise that gives equal weight to all areas of the saga (not just the movies). Seeing Lothal or the mysterious The Clone Wars world of Mortis (is it a planet…or another dimension??) right alongside Mustafar and Endor is particularly satisfying. 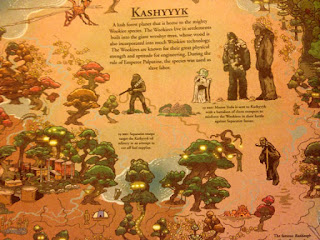 Star Wars Galactic Maps is full of surprises, from its large 11 x 15” size to its cleverly illustrated 2-page spreads to its representation of all eras of Star Wars.


It’s simply a wonderful book and unfortunate that it came out so late in the year. It has been added to our “Best of 2016” list now. Highly recommended!

Publisher’s Recommendation: Ages 8 – 12
Posted by Star Wars Kidscast at 12:10 AM