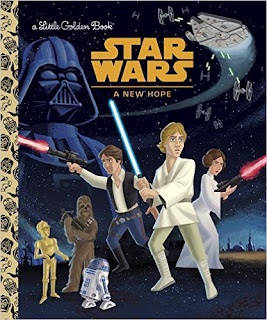 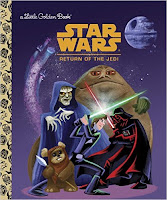 For over a half-century Little Golden Books have been a staple of North American children’s bookshelves with their distinct style and classic tales.

Star Wars fans have been treated to the odd Golden Book in the past but never before in such an ambitious way! Random House has recently published adaptations of all 6 current Star Wars films as Little Golden Books, each full of brand new, but retro-styled, artwork!

The whimsical, colourful style of the illustrations makes these feel like they could be from the 1960’s or 70's instead of 2015. Even with different illustrators involved the fact that these books are brought to life through cartoonish paintings really puts things into one cohesive story. By not using photos from the films, the more modern-looking prequel tales blend smoothly with the stories of the original trilogy. Everything has an equally vintage look to it.

Even the writing at times feels a bit “retro” like when Darth Vader is momentarily referred to just as “Darth” in Geof Smith’s take on A New Hope. Back before Episode 1 came out in 1999 many of us had no idea that Darth was a title given to Sith so it was widely assumed Darth was Lord Vader’s first name, like Bob or Fred. Pre-1999, referring to Vader as Darth seemed as natural as saying just Luke, Han or Chewie. We know better now! 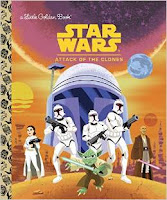 The writing is fun and fast but occasionally suffers as there’s a LOT of story to try to compact into heavily-illustrated 24 pages. Key dramatic moments are somewhat lost (the destruction of the planet Alderaan is barely mentioned) or omitted entirely (Leia killing Jabba the Hutt). Some of these cuts are for sensitivity to the very young readers and some are simply for space. Overall though the key plot points and scenes are there.

Since most books for this age are meant to be read TO kids as much as by kids, it’s up to the reader to add the drama, the intensity, character voices and sound effects. 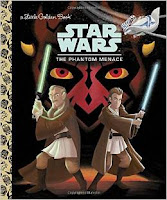 If you are already familiar with the movies, these re-tellings are a fun and entertaining way to revisit the stories in a brand new way. For very young younglings these may be a wonderful way to introduce the saga we love so much.

Here are some of the earlier Star Wars Golden Books: 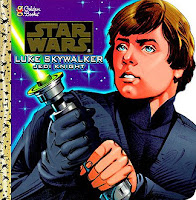 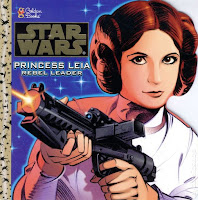 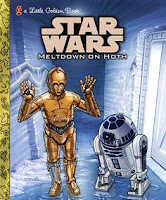 Posted by Star Wars Kidscast at 10:49 PM No comments: