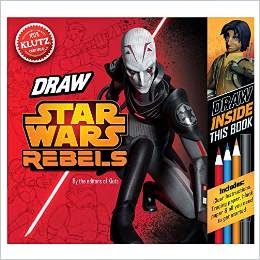 You may be tempted to just follow the pictures in a book like this, but side-notes, tips and comments throughout offer an extra layer of help. Even though this is a Klutz book (which usually means more DOING than reading), make sure you stop and read along the way. 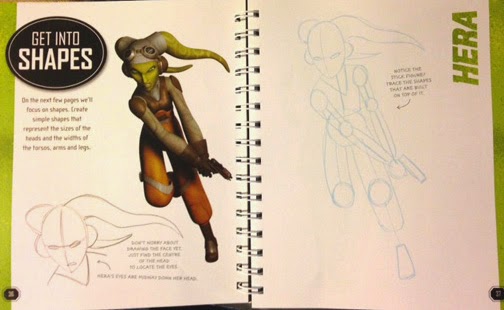 With illustrations by Star Wars artist Grant Gould and instructions by "the editors of Klutz" this is a fun way to practice basic concepts, figure drawing and polishing your work into clean, professional-looking artwork.

There's a section at the back for drawing the Ghost and TIE fighters but like the earlier Draw Star Wars The Clone Wars the focus here is on drawing full body characters and action poses. Starting with stick figures, the steps guide you to build from there giving your characters dimension, weight and form. Eventually it moves to details and shading. 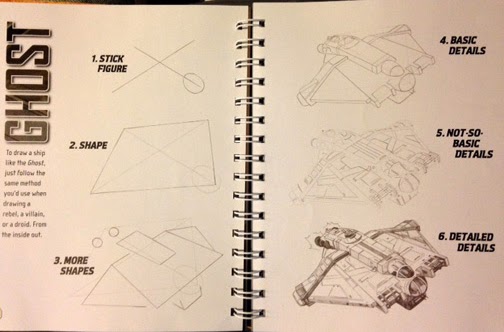 Just as with the Clone Wars one, I would've liked to also see some pages about creating facial expressions and close-up details, like how to do Sabine's helmet and armor or the markings on Zeb's fur, for example. The small pages don't really allow for that. However Draw Star Wars Rebels is a great place to start and it comes with quality drawing supplies to get you going.

Publisher's description:
This latest addition to our Star Wars book series is a how-to guide packed with expert tips, simple techniques, plenty of draw-right-in-the-book space, and translucent overlays to make you a master of drawing. Start with stick figures, move onto basic shapes, and finish up with the details. This sketchbook comes with everything you need, and we also include perhaps the most essential tool for any artist… an eraser. Because sometimes even a Jedi Master could use a do-over.

Here's our reviews of other creative Klutz Star Wars books: 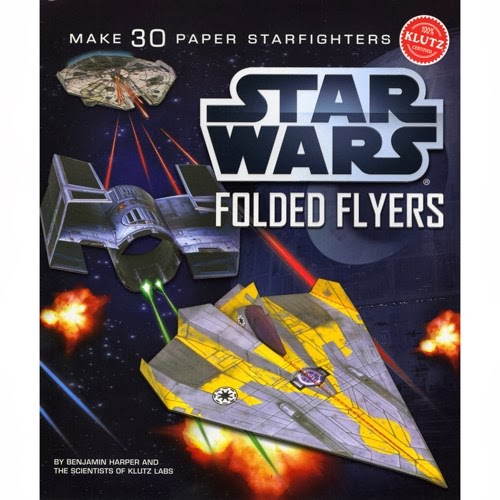 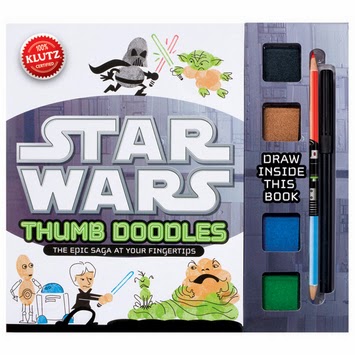 Posted by Star Wars Kidscast at 10:37 PM No comments:

Who will be in Star Wars Rebels Season 2?

Season 1 also featured many familiar characters too: Obi-Wan Kenobi appeared as a hologram, Yoda appeared as a voice, and C-3PO, R2-D2, Bail Organa, Lando Calrissian, Governor Tarkin and even Darth Vader all directly or indirectly encountered the crew of the Ghost. Then there's Fulcrum, the elusive guide to the Rebels, finally revealed in the season's end!

With all those well-known Star Wars characters it certainly makes you wonder who else could appear. Remember, Star Wars Rebels takes place between the movies Episode III and Episode IV, just a few years before the Rebel Alliance took on the first Death Star.

Luke Skywalker would be about the same age as Ezra Bridger, working on his Aunt and Uncle's moisture farm on Tatooine. A big part of Luke's story was that as a teen he longed to get away from the boring farm life and to seek adventure somewhere else. It seems unlikely that Luke saw any rebellious action before getting that infamous message of  "Help me, Obi-Wan Kenobi..." from Princess Leia.

But then again, Luke seems quite aware of the Rebel Alliance when he excitedly says to C-3PO "You know of the Rebellion against the Empire?"

Then later he tells Obi-Wan Kenobi "It's not that I like the Empire - I hate it". Why does Luke "hate" the Empire?

From the looks of things in A New Hope and Return of the Jedi, the Empire barely exists on the Outer Rim planet of Tatooine except in the town of Mos Eisley. Perhaps something else DID happen? Maybe Luke knows other farmers who were treated as badly as the Imperials treat Lothal farmers. Maybe something big happened on Tatooine that Luke witnessed?

Pairing up the inexperienced and innocent Luke with the street-wise, independent teens Ezra and Sabine could make some interesting dynamics. We'll have to wait and see, of course, but while it seems far-fetched to imagine Luke Skywalker on Star Wars Rebels, we're not going to rule it out.

Princess Leia Organa seems like a safer bet than her (spoiler alert!) twin brother Luke. First of all, her adoptive father Bail Organa of Alderaan has already been on the show twice and has direct contact with other Rebel cells. She is also of course the same age as Luke and Ezra, and her mother Padmé was already a Queen of Naboo by that age!

When Leia encounters Darth Vader and Tarkin in Episode IV, it seems like they've already met and Vader acknowledges she's been running "mercy missions" prior to their meeting then. We're going to say probably to the thought of seeing Leia on Rebels.

Han Solo & Chewbacca seem like they've been flying around the galaxy in the Millennium Falcon for years by the time they meet Luke. So it's likely that's what they are already doing when Ezra meets the crew of the Ghost. Since the Rebels have met Lando Calrissian, it's not hard to imagine they could meet other scoundrels and smugglers. Chewbacca already made an appearance in The Clone Wars fighting alongside then-Padawan Ahsoka Tano. There's already been many wookiees in Star Wars Rebels: Spark of Rebellion.


Who else could show up on an episode of Rebels? Who would you like to see? Jabba the Hutt? Boba Fett? Darth Maul? Comment below...
Posted by Star Wars Kidscast at 2:21 PM 1 comment:

YA, as it’s known, can be simplified as “fiction for teens” but there’s more to it than that. Current YA can be as edgy and challenging as “adult” fiction but generally has young protagonists deal with meaningful-to-teenager issues, regardless of how fantastical the storyline or setting may be. But YA isn’t just about teens: good YA novels really speak to teens.

Arriving September 4th, 2015 among several other titles under the exciting “Journey to Star Wars: The Force Awakens” banner is Lost Stars by best-selling YA novelist Claudia Gray. Gray is known for supernatural stories that never shy from romance like her Evernight series and Spellcaster trilogy. Be sure to read her website's fun post about getting to write a Star Wars book!

Here’s the publisher’s description of Lost Stars: This thrilling Young Adult novel gives readers a macro view of some of the most important events in the Star Wars universe, from the rise of the Rebellion to the fall of the Empire. Readers will experience these major moments through the eyes of two childhood friends - Ciena Ree and Thane Kyrell - who have grown up to become an Imperial officer and a Rebel pilot. Now on opposite sides of the war, will these two star-crossed lovers reunite, or will duty tear them-and the galaxy-apart?

Star Wars “adult” novels have always been mostly PG to PG-13, so why does Star Wars need to be in Young Adult too? Can’t young readers just go from the kids' novels straight to the Del Rey series?

Sure, they can, but they may not want to.

Teens may want to read about what teens really do in the Star Wars universe, and that’s an area where Star Wars fiction has seldom gone. Traditionally Star Wars books focusing on teen characters are intended for kids 8-12, known as "middle grade" readers to the publishing world.

Imagine if Sabine could share her true thoughts with no frowning adults or impressionable children around, or if farmboy Luke could really unload about his frustrations with Uncle Owen. What about that Paolo guy Padmé spoke about? That’s the kind of thing that could be in Star Wars YA. Not your thing? You’re likely not a teenager then! Lost Stars and future Star Wars YA novels could become meaningful entry points for teenage fans wanting to get into Star Wars fiction.

While Star Wars Kidscast blog & podcast usually focuses on Star Wars stuff for children, this new expansion into teen readership will be something we, to paraphrase Senator Palpatine, will watch with great interest!

Learn more:
Author Chuck Wendig , no stranger to YA, will also have his first Star Wars novel published this fall by Del Rey (entitled Aftermath). On his site terribleminds.com he has a terrific breakdown explaining modern YA. Fair warning: the article contains some foul language but if you can’t handle a few curse words then tread carefully into contemporary young adult fiction!
Posted by Star Wars Kidscast at 11:49 PM No comments:

Star Wars Podcasts: The Next Generation


Readers of this blog or listeners to the Star Wars Kidscast podcast* may notice that we’re no longer calling the show “The only podcast in the Galaxy for kids”. You may still see that line appear here and there while things get cleaned up, but that won’t be the tagline going forward for two very cool reasons...

Two new Star Wars – themed podcasts have come onto the scene, and both of them feature KIDS in a big way! If you're not already listening to The Younglings Podcast and Children of the Force here's a closer look: 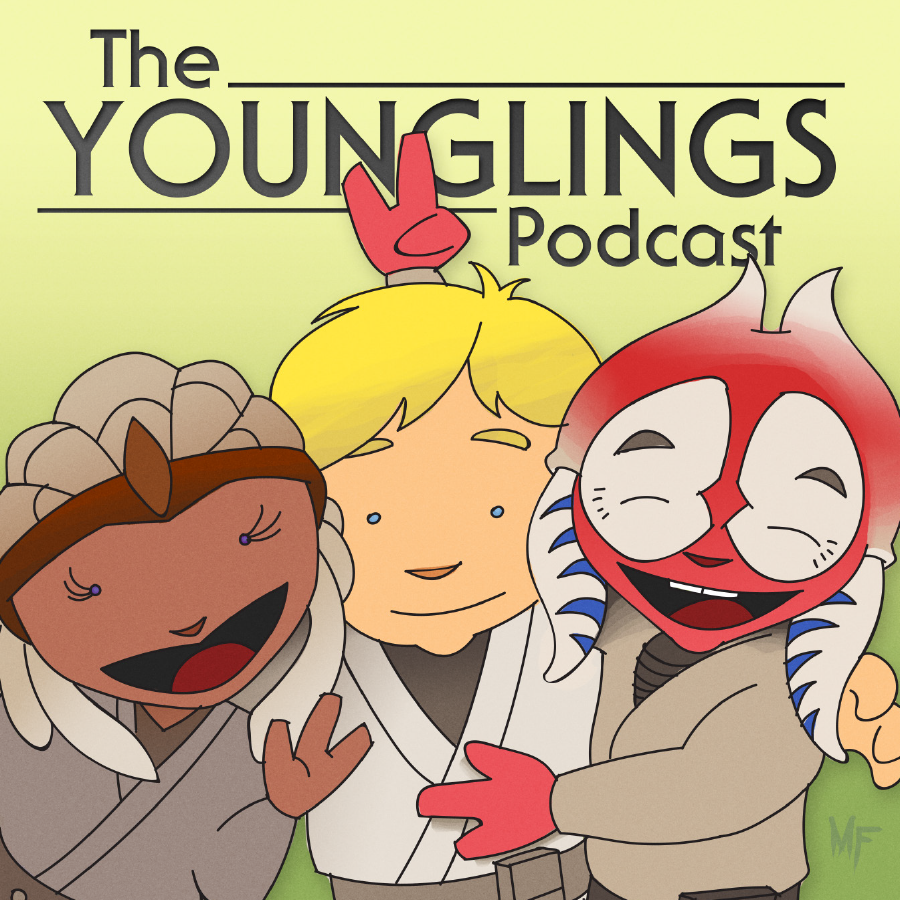 The Younglings Podcast features siblings Annie (age 10) and Tessa (age 7) as they bring on guests (often friends or family members) to discuss Star Wars news & opinions. The episodes are short (8-12 minutes) but they have a lot of fun, especially when they re-enact scenes from the movies or practice their character voice impressions.

These kids are witty, entertaining and LOVE Star Wars. Mom & Dad get thanked for their behind-the-scenes help but this is truly a show “for kids, by kids”!

Have a listen here: https://theyounglingspodcast.wordpress.com 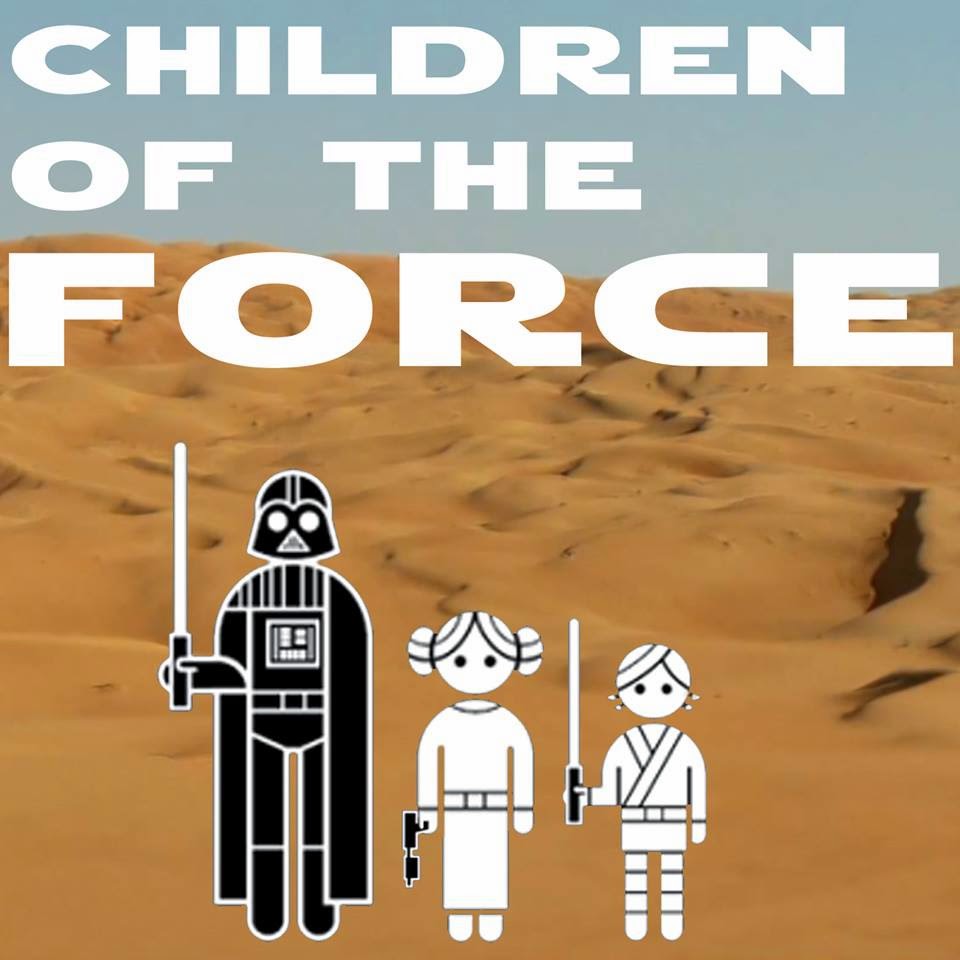 Children of the Force is “a podcast about Star Wars by one adult and his two children”. It’s a family-friendly discussion of Star Wars news, Rebels episodes, and everything else going on hosted by a Dad (Al) and his two Star Wars - loving kids Anna (age 8) and Liam (age 6).

This show isn’t necessarily designed for kids and listeners of any age can enjoy the animated and enthusiastic commentary by Anna and Liam. A recent highlight is hearing the kids' immediate reactions to the reveal of Fulcrum's identity on Star Wars Rebels! The discussions are in-depth as Dad leads them through various topics. Obviously this family has been discussing and enjoying Star Wars together for a long time and now they're sharing their conversations!
Have a listen here: www.childrenoftheforce.com

Congratulations to these two new, exciting shows and all the creative kids (and parents) involved!
-Chris @SWKidscast

*It's been a while but new episodes are coming!
Posted by Star Wars Kidscast at 8:34 PM No comments: