Marvel Comics was the first company to print Star Wars comics back in 1977 and continued the series until 1986 along with the Droids and Ewoks comics until 1987. After a few years of no Star Wars comics at all, Dark Horse Comics began its own very successful storytelling in the galaxy far, far away from 1991 to the end of 2014.


The 2015 Star Wars series kicks off a brand-new storyline set between Episodes 4 and 5. The first Death Star has been destroyed, Han and Chewbacca are getting used to be being good guys, Luke hasn’t met Yoda yet and Leia has resumed her role as a leader of the Rebellion.

This is the same time period of the original Marvel Star Wars comics of the 1970’s, as well as many books like the Rebel Force series of kids’ novels.


The comic is well-written by Jason Aaron and drawn by artist John Cassaday and has many fun twists even within the first issue. You can read detailed reviews elsewhere but the real question for us is: Is it appropriate for kids?


The first issue comes with a Teen rating and earns it with a degree of violence similar to what you’d see in the movies. The story is not inappropriate for older kids who love the movies. Kids are just not the main intended audience. Shootings, slavery and lightsaber slicings happen, as you would expect in a Star Wars story along with comedic moments as part of the adventure.

Star Wars #1 isn’t a kids’ comic book but for young readers who enjoy the movies, this is a great time to start enjoying monthly adventures in the galactic battle between Dark and Light.


In this issue is also a sneak peek at the upcoming new Darth Vader and Princess Leia comics, coming soon along with a series focusing on Kanan from Star Wars Rebels. No word if Marvel has plans to make comics specifically for kids but of course that would be mentioned here if/when that happens!

Read, You Must: Star Wars: The Adventures of Luke Skywalker, Jedi Knight 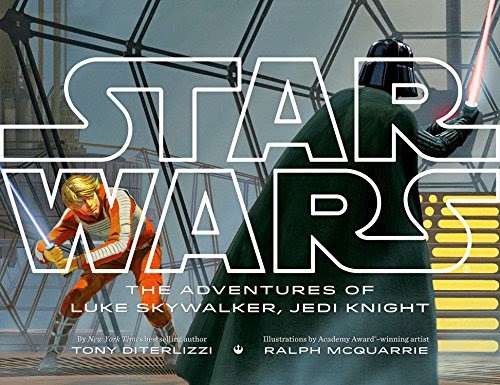 As part of a series of new books retelling the Star Wars saga for young readers, Disney Books begins with Star Wars: The Adventures of Luke Skywalker, Jedi Knight written by popular children’s author/illustrator Tony DiTerlizzi and illustrated by the late Ralph McQuarrie, the artist who defined the look of the Star Wars universe more than anyone else.

Despite the very long title, the story compacts Luke Skywalker’s heroic journey from Episodes IV, V and VI into one 64-page picture book.


Like Pablo Hidalgo’s Star Wars Rebels: A New Hero, this book is illustrated using “pre-production” or “concept” artwork - images created early in the making of a movie or TV show to give an idea how it will look later.


Tony DiTerlizzi, best known for creating fantastical, detailed worlds in the middle-grade novel series The Spiderwick Chronicles and more recently the WondLa books, condenses the three-movie story by focusing mainly on moments Luke was around. The word “adventures” is in the title on purpose as DiTerlizzi briskly focuses on key action scenes.


For some fans, this book is worth having simply as a collection of Ralph McQuarrie artwork. Most of this art has been used before on posters, book covers or featured in books and magazines about the making of Star Wars. However even this long-time fan discovered some images I’d never come across before! Having them all collected in an inexpensive hardcover book is a wonderful alternative to earlier coffee-table books.


Other fans may be puzzled by the images that, while beautifully painted and reproduced, often don’t quite match what is seen in the movies. Yoda, Lando and C-3PO in particular may look odd, even “wrong”, at times. I remember having that reaction as a kid when many of these early paintings were on trading cards, before I learned what pre-production meant.

As wonderful as it is to see Ralph McQuarrie’s art in a new setting and presented to a young audience, Tony DiTerlizzi is an amazing artist himself and hopefully he will create some Star Wars artwork in the very near future!

Star Wars: The Adventures of Luke Skywalker, Jedi Knight is as much an impressive art collection for nostalgic parents as it is an engaging introduction to Luke Skywalker’s story.

-Chris @SWKidscast
Posted by Star Wars Kidscast at 10:53 AM No comments: