Star Wars tie-in products have always come in different shapes and sizes. Sometimes companies try to create something completely unique to grab the attention of young fans. Occasionally things get a little odd! Here's our first look at such items from the past in a new segment called STAR WEIRD!

Back in 1997 the original trilogy (Episodes 4-6) films were being re-released to movie theatres and it was a BIG deal. Fans had kept the galaxy alive over the years, but to the general public, Star Wars had been over since 1983's Return of the Jedi.

Along with the renewed public interest in Star Wars came many related products, including this bizarre kids' book from the "Golden Books" series (at the time not called "Little Golden Books") Star Wars: A More Wretched Hive: The Mos Eisley Cantina (1997). What makes this one so odd? It's a Scratch and Sniff  book!

Yep that's right. You get to SMELL the infamous Mos Eisley Cantina, inside and out!

Scratch and Sniff books were a popular novelty in publishing during the 1980's but not very common nowadays. There were earlier titles that incorporated the concept into Star Wars books. A More Wretched Hive appears to be the last one made.

The story, told by Margaret Ryder, is a quick version of Luke and Obi-Wan's first meeting with Han Solo and Chewbacca, then blasting off in the Millennium Falcon. Ryder has fun with emphasizing the gross smells the characters encounter. The book is illustrated with photos specifically from the 1997 "Special Edition" version of Episode 4. However it's the smells that make A More Wretched Hive stand out!

Along the way the reader enjoys the scents of:

If you feel the need to join in these delightful smells A More Wretched Hive is often still available online or in used book stores. For good or bad, the 19 year-old smell stickers may not work so well anymore though.

As Jar Jar would say:

Posted by Star Wars Kidscast at 11:50 AM No comments:

Read, You Must: Star Wars ABC-3PO 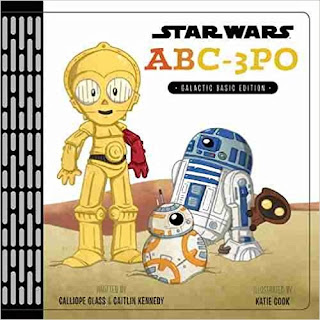 New from Disney-Lucasfilm Press comes Star Wars ABC-3PO, Galactic Basic Edition, a fun, funny and alphabetical look at the characters and creatures that make up the galaxy far, far away.

Authors Calliope Glass and Caitlin Kennedy have fun with the poetry and the book is wonderfully illustrated by Katie Cook’s cartoon art. (Artist Katie Cook was once a guest on the Star Wars Kidscast podcast). The poems are nicely varied in style, rhythm and length and consistently light in tone.

Each letter has a focused poem (from Admiral Akbar to Zeb) spotlighting characters, starships and moments from Star Wars Rebels and of course most of the Star Wars feature films including The Force Awakens. There’s no inclusion of anything from Attack of the Clones, Revenge of the Sith or even The Clone Wars TV show though. 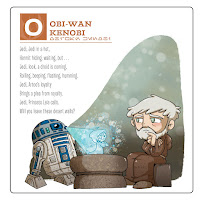 A few samples of the fun rhymes inside:
From E for Ewoks:
“Ewoks are tricky. They seem fluffy and cute. But if they attack, you might want to scoot.”

From M for Millennium Falcon:
“A bucket of bolts, This hunk of junk, She jostles and jolts, From cockpit to trunk.”

From X for X-Wing:
“A fighting pair, droid and human, Astromech and rebel crewman.” 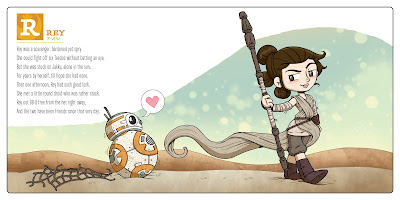 Some of the humour in ABC-3PO may be lost on casual fans, directly referencing longtime fans’ inside jokes like “It’s A Trap!” and Stormtroopers’ terrible marksmanship. At times it feels like the book is trying too hard to be witty – even the subtitle “Galactic Basic Edition” is never explained and becomes another inside joke and possibly confusing to casual or new fans. (FYI: In Star Wars lingo "Galactic Basic" just means English.)

However, if you happen to be a parent AND a serious Star Wars nut like most of the readers of this blog, ABC-3PO is a fun way to reinforce and build on the basics, or to apply what your child is learning already from preschool, kindergarten or workbooks like the wonderful Star Wars Preschool ABC Fun from Workman Publishing.

Then again, the kids may have to wait until the adults are done enjoying this one! 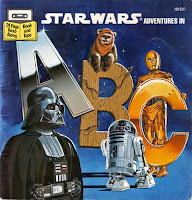 There have been other Star Wars alphabet books before including Scholastic’s Star Wars ABC (2010). ABC-3PO has more in common though with the 1984 Read-Along Book Star Wars Adventures in ABC which also contained humourous poems for each alphabetical entry. That book had very silly poems but surprisingly serious-looking artwork inside.
Posted by Star Wars Kidscast at 10:12 PM No comments: