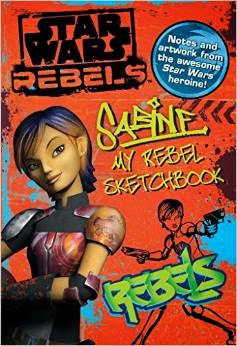 Would you let someone else read your diary? Two new books present young readers the private thoughts of key Star Wars Rebels characters.

Rebel Journal by Ezra Bridger and Sabine: My Rebel Sketchbook (both actually written by Daniel Wallace) are two heavily illustrated, middle-grade hardcovers out now. Both books are more like scrapbooks than straight diaries and are full of images from the TV show, fun and insightful comments, new artwork, some fold-out pages and lift-flaps of clippings “taped” in.

Ezra’s Rebel Journal comments on the events leading up to him first meeting the rest of the Ghost crew, even touching on some of the action in Ryder Windham’s excellent Ezra’s Gamble novel. Sabine’s My Rebel Sketchbook tells the story of much of season one of Star Wars Rebels from her point of view. Her book has much more emphasis on her paintings and sketches than writing, which suits her.

Studio Fun Books has created two entertaining and engaging books for young readers who still like a lot of visuals. As mentioned before, both books are written by Daniel Wallace, author of the journal-like series The Jedi Path, Book of Sith and The Bounty Hunter Code. Wallace does a great job of making both books feel like they really could be written by the characters.

It must’ve been a challenge to write authentically in teen-aged voices knowing that these books were intended for pre-teen and younger kids. A real diary from a rebellious teenager would likely be inappropriate for younger readers. In fact both books, as age-appropriate as they are, endorse activities that could get kids into trouble. Thankfully Sabine doesn’t get too detailed in her description of making explosions!

The other challenge for the author is that the characters can only reveal things, even in their own private journals, that the TV show's audience already knows. A few revelations would’ve been nice to see, particularly considering the mysterious history of both characters. In the show, Ezra also clearly has some sort of romantic feelings for the older teen Sabine. It would’ve been nice for at least one of them to comment on this. Perhaps they’ll both get a Volume 2?

The look and design of both books is wonderful and the artwork is particularly stunning in Sabine’s sketchbook. This is thanks to artist Annie Stoll who not only creates beautiful pieces, also has a lot of fun “modifying” Imperial posters, as Sabine would. Ezra is surprisingly a talented artist himself, as his sketches (by Andrew Barthelmes) illustrate his journal.

Whether you want to revisit the events of the first few episodes of Rebels from these characters’ own perspectives, want a very cool-looking collection of Rebels artwork at a reasonable price, or both, these books are a great addition to any Star Wars Rebels fan’s library.

Did you know: these are not the first Star Wars characters to have diaries?

An earlier series of books (now out-of-print) from Scholastic Books published the diaries of Luke, Leia and Han...

and then later Queen Amidala, Anakin and Darth Maul too!

Posted by Star Wars Kidscast at 9:23 PM No comments:

Keep an Eye Out for Weird C-3PO Toys! 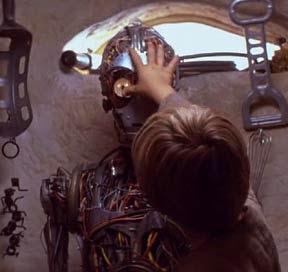 Poor C-3PO! If any character in Star Wars has continual vision problems, it's the loveable - if occasionally annoying - protocol droid.

In Episode I young Anakin introduces Padmé to the droid, only to discover he's missing an eye! Then in Episode V as Chewbacca tries to reassemble him, he exclaims "Something's not right because now I can't see!"

Finally in Episode VI Jabba's cackling sidekick alien Salacious Crumb goes so far as to peck one of C-3PO's eyes right out!


Only George Lucas knows why "Threepio" was made to suffer, but it seems the folks at Hasbro toys are having some fun with the droid's "photo receptor" mishaps. At least that's the only thing that makes sense to explain a bizarre situation with the eyes on the latest C-3PO action figures.

The Star Wars Rebels version of C-3PO, as seen in the first episode "Droids in Distress", is supposed to look like this official picture from Hasbro: 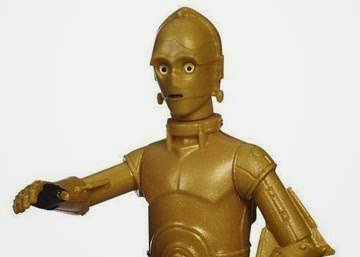 Reality is a bit different and many fans are noticing some incredibly funny paint-jobs on his eyes:


To be fair, a couple of people have found Star Wars Rebels C-3PO figures that look at least something like they're supposed to, but I am not one of those fortunate ones. It's hard to understand why the paint-jobs are so terrible on so many of this figure, and differently terrible on each one.

Here's the BEST ones found so far:

Does your C-3PO have a funny expression? Does yours look "right"? Either way, leave a comment below or send a photo to starwarskidscast@gmail.com

UPDATE: Well I found myself a pretty decent Rebels C-3PO... 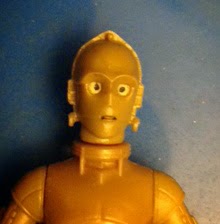 but I feel bad for whoever got the only other one... 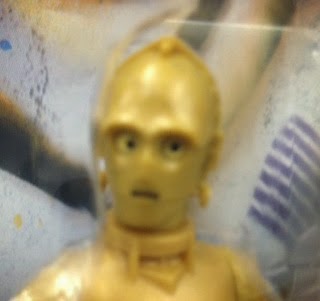 Posted by Star Wars Kidscast at 11:35 PM No comments:


Valentine’s Day means giving out heart-covered cards and other goodies to friends and classmates, but also can be another way to share your love for movies, TV shows and toys. Star Wars valentines have been around almost as long as Star Wars movies.

This year’s batch of valentines feature for the first time characters from Star Wars Rebels, so there’s yet another opportunity to spread the word about this fantastic DisneyXD show.

Will next year’s cards have characters and scenes from the new Star Wars movie The Force Awakens? Very likely, but for now here’s a look at some of the cards and treats available.

Paper Magic has at least two sets of Star Wars Rebels valentines out there. One contains miniscule glow rods to go with each card, presumably because they sort of look like little lightsaber blades? They are only slightly larger than LEGO Star Wars lightsabers. Another Paper Magic set comes with tattoos of the main Rebels characters. There is also a very similar set that comes with stickers instead of tattoos.

One odd thing: throughout the first few episodes of Star Wars Rebels, Hera is often calling Kanan “Love” as a pet-name. Obviously they are very close, whatever she means by the term. So why isn't the word Love on any of these valentines? Seems like of all days, Valentine's Day would be appropriate to say it.

Not all the valentines out this year focus on Star Wars Rebels though.

There's a lot of images from our friends at JediNews.co.uk with new Star Wars valentine items from several countries.

Here's a few more of this year's items at RebelScum.com 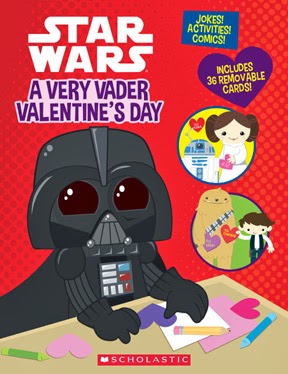