Get outside and enjoy the winter weather, Star Wars style! There are plenty of moments to re-enact in the snow. Imagining being on The Empire Strikes Back's "remote ice world" of Hoth was a common part of outdoor winter play for me. Due to our winters, Hoth seemed the most familiar location among all the exotic locations of the galaxy far, far away. 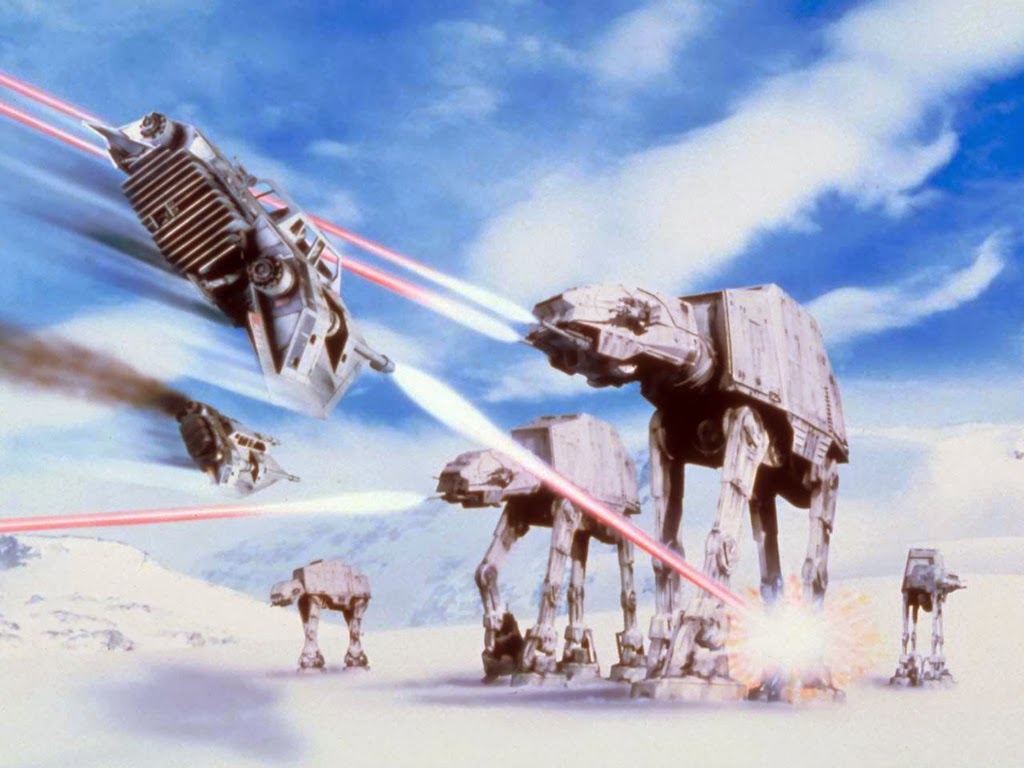 Of course we didn't have AT-AT walkers, wampas or tauntauns, but we had plenty of snow and imaginations. Snow forts could easily become Echo Base, or the rebel trenches or even the wampa cave. Hanging upside down like Luke was a little trickier though!

The battle of Hoth is one of the coolest (hehe) scenes ever presented on film, but did you know Hoth is not the only icy place to play in the Star Wars Galaxy?

Jude Watson's 2001 children's novel Jedi Quest: The Path to Truth introduced a new icy planet called Ilum to the Star Wars Expanded Universe. There a chilly young Anakin seeks a crystal to create his lightsaber as part of his training, just as Jedi trainees had done for generations before him.

If this sounds familiar to you, you may remember in The Clone Wars when the Jedi Younglings travel to Ilum to seek their own crystals in the ice caves. In The Gathering (episode 6, season 5) Ahsoka & Yoda instruct six young Jedi (including my favourite Gungi the Wookiee!) on what they must do and face within the ice caves to retrieve their very own crystals as a rite of passage for Jedi.

In the earlier Star Wars: Clone Wars "micro-series", 3 mini-episodes (Chapter 14-16) featured Jedi Master Luminara Unduli guiding her Padawan Barriss Offee to construct her own lightsaber with a newly-aquired crystal. Things go horribly wrong when Separatist droids sneak in and try to destroy the sacred temple among the ice caves. Yoda, Padmé, C-3P0 & R2-D2 must brave the cold and face the invisible droids to rescue them.

Once you're done imagining you're a Jedi on a sacred quest to find your own lightsaber crystal on Ilum, you can take a pretend hyperspace jump over to yet another ice planet in the Star Wars Galaxy to the "bleak, snow-covered planet" of  Orto Plutonia.

In The Clone Wars first season (Episode 15: Trespass), Anakin and Obi-Wan travel to Orto Plutonia to investigate what happened to a Republic base but find themselves in a conflict between the Pantoran military and the furry native Talz species. Peace is eventually reached but not without a price.


So if you happen to live somewhere snowy, you can envision yourself riding a Narglatch snow cat with the Talz or zipping over the ice on a Freeco speeder bike too!

UPDATE: December 2014
Once we find out who this guy is and what he's doing in a dark, snowy forest there's whole new scenes to play out & have fun in the snow!

Just because it's cold and snowy outside, don't let that get in the way of your Star Wars play. There's plenty to re-enact or create yourself in the wintery Galaxy. 'Tis the season!


Just an aside: I've never understood how Han Solo's Tauntaun (a native species of Hoth) freezes while Han himself and Luke can survive the freezing conditions. Any thoughts? Leave a comment below!
Posted by Star Wars Kidscast at 2:34 PM 2 comments:

The Disney Destiny? Looking Back a Year Later

When Walt Disney purchased Lucasfilm it was a shock to many - but perhaps it was destiny?

Back in 1980 Mark Hamill made his appearance on very popular The Muppet Show alongside “the stars of Star Wars”. For the grand finale musical number that includes Luke Skywalker, C-3P0, R2-D2 and a naked-looking Chewbacca dancing and singing, a medley of star-related songs climax with the signature Walt Disney song “When You Wish Upon A Star” complete with fireworks under a Dark Side rendition of the iconic Sleeping Beauty Castle (aka. the Walt Disney logo). Yep, Muppets & Star Wars characters all singing the Walt Disney theme song…over 30 years ago!

Posted by Star Wars Kidscast at 10:41 AM No comments:

Got a few younglings or Padawans on your Christmas list? Here's Star Wars Kidscast's continuing recommendations for gifts big and small. Part three is all about the youngest readers on your list. 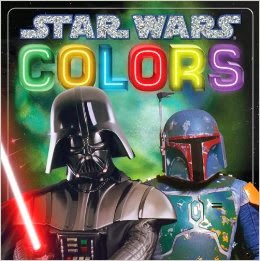 Star Wars Colors Third in a recent series of board books for the earliest readers, Colors features big bright photos from the Star Wars movies that illustrate various colors. These are large-sized board books so are more for reading together than for toddlers to hold themselves in the car or stroller. Previous titles include Star Wars ABC and Star Wars 123. (Scholastic)

DK Readers: Star Wars: Are Ewoks Scared of Stormtroopers?
DK keeps coming out with more fun titles in their DK Readers series. The Star Wars ones are no exception. Each is clearly labelled with a suggested reading level and each is illustrated with still images from the Star Wars movies, Clone Wars, LEGO Star Wars or Angry Birds Star Wars. They all have a theme and look at the characters & worlds of Star Wars in an age-appropriate way. (DK Books) 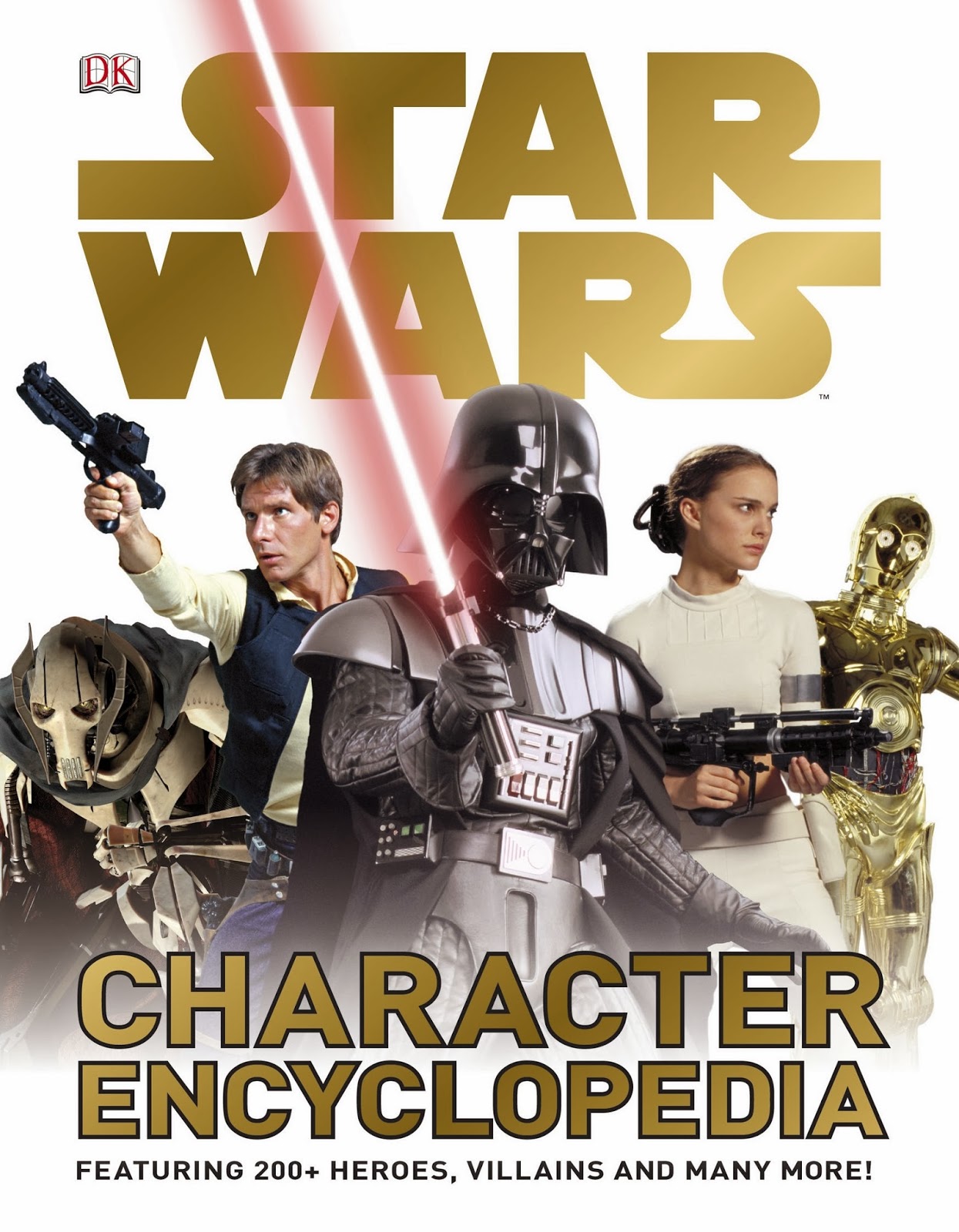 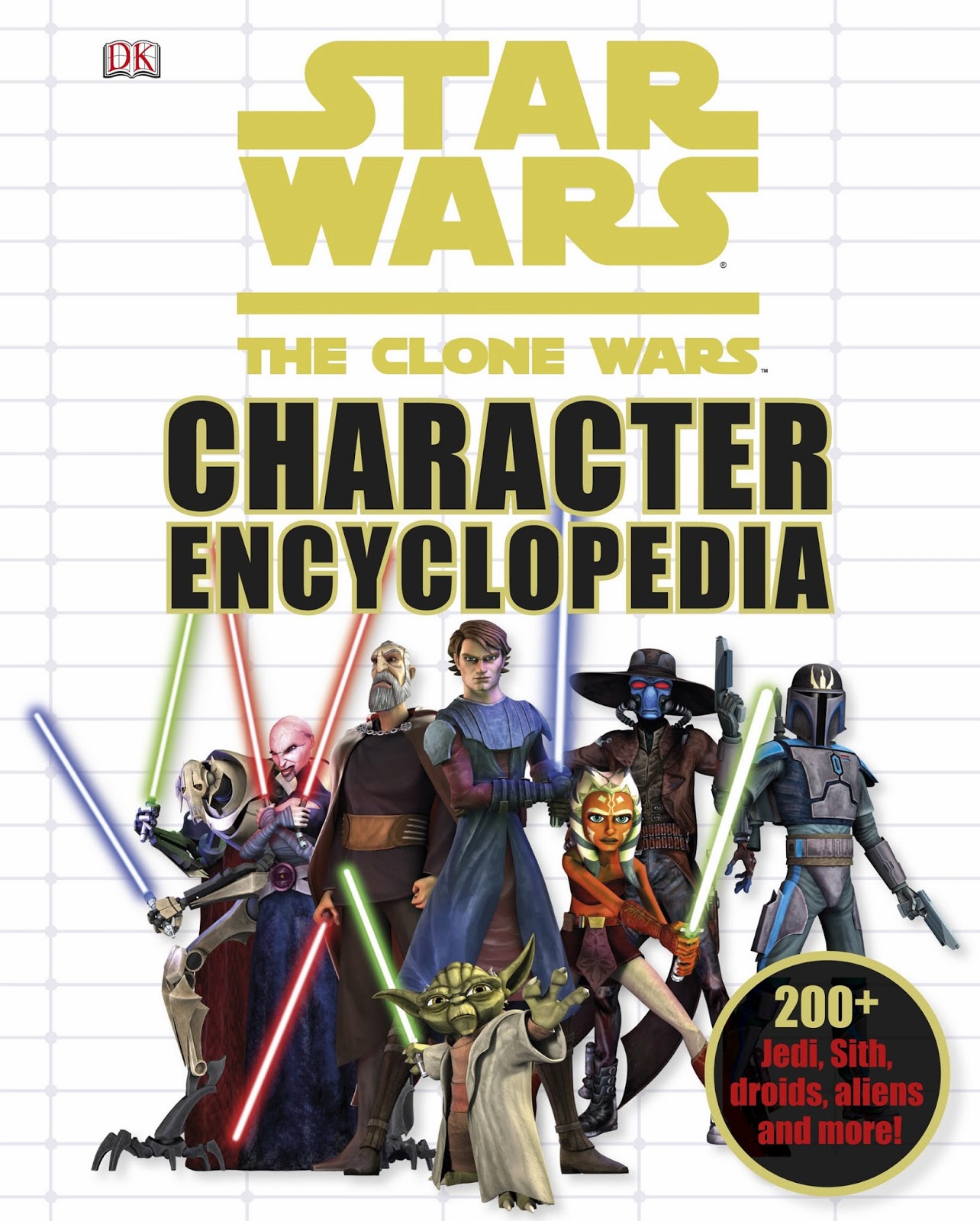 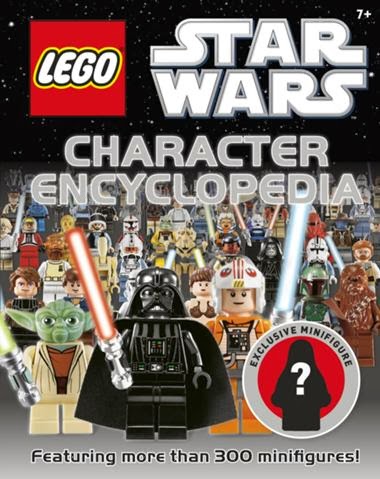 LEGO Star Wars Character Encyclopedia - Not only a comprehensive guide to all the minifigure characters of LEGO Star Wars but you get some background on the evolution of the toy line. Great for young fans AND collectors. (DK Books) 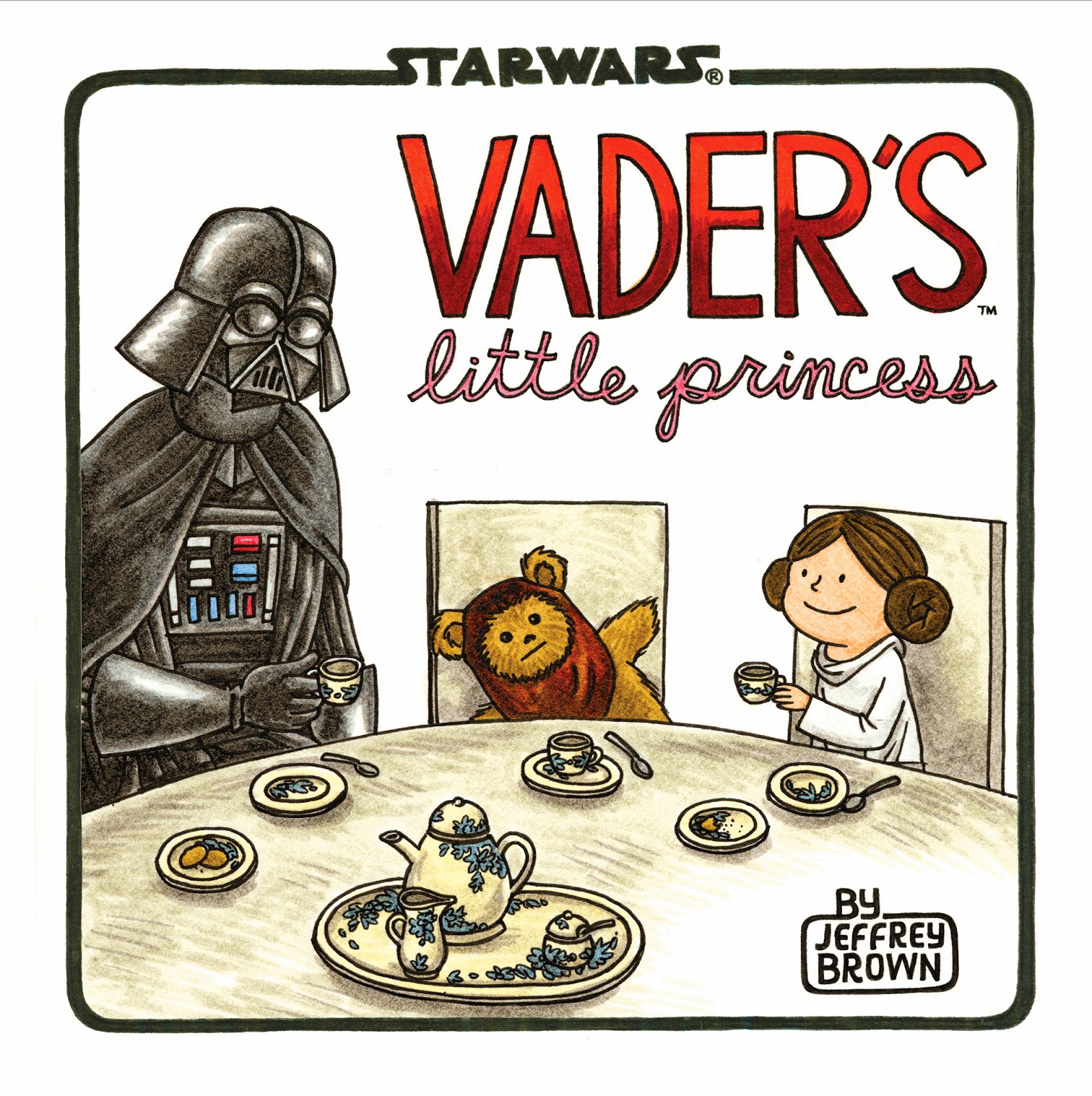 Star Wars: Darth Vader and Son & Vader's Little Princess
If you don't already have these VERY popular books they are cute, fun and colorful collections of moments of an imagined alternate childhood of Luke and Leia and life with their Dad, Darth Vader from artist Jeffrey Brown. Suitable for grownups to enjoy and for kids of all ages. (Chronicle Books)


More recommendations to come! Hopefully in time for Christmas!
Posted by Star Wars Kidscast at 11:56 AM No comments:

Got a few younglings or Padawans on your Christmas list? Here's Star Wars Kidscast's recommendations for gifts big and small.

Enjoy the Star Wars movies in a whole different way, anytime and anywhere. For each Star Wars film there's a junior novelization of the whole story, written at an age-appropriate reading level. A strong young reader may want the "grown-up" versions, but most kids would do better with these. (Scholastic Books) 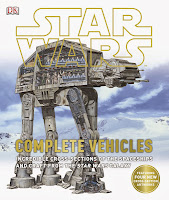 Star Wars Complete Vehicles - Gathering the best of several Incredible Cross Sections books into one beautiful coffee-table sized hardcover book. If your younglings are as into visuals and details as reading then this is an amazing book. (DK Books) Read our review here

Origami Yoda series by Tom Angleberger: Set on Earth in the present day, these funny and occasionally touching Star Wars-infused novels will entertain many older kids and even adults!  There's a new book coming in Spring 2014 but a great start would be the first four books in this box set: The Origami Yoda Files.

Fun fact: Shadows of Endor artist/writer Zack Giallongo was the first guest ever on the Star Wars Kidscast podcast! Have a listen here! 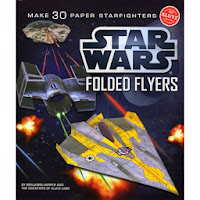 Posted by Star Wars Kidscast at 12:02 AM No comments:

At the top of any list should be the actual Star Wars films. If your family has yet to own copies of the first 6 movies (fun to be able to say that because Episode 7 draws closer each day!) now is a good time to get them. The "Prequel Trilogy" (Ep. 1-3) & the "Original Trilogy" (Ep. 4-6) are available now as BluRay/DVD combo boxed sets. If you can still find it though, we recommend the earlier BluRay "Complete Saga" set because it has THREE DISCS of bonus features! 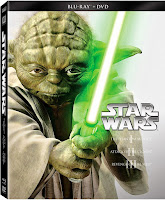 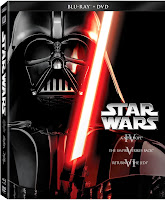 If you already have the movies and haven't been collecting each season set of The Clone Wars, you can get the complete set now of all 5 seasons! Each are also individually sold too. This show was/is amazing and never got the recognition it deserved. Sadly it's over, but there's 5 seasons to enjoy again and again! 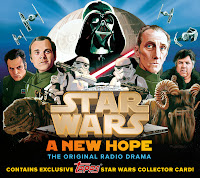 HighBridge Audio recently re-released the Star Wars Radio Drama on a single mp3 CD. Now you can enjoy this expanded version of Episode 4: A New Hope on the road or at home. Recorded in 1981 with Mark Hamill (Luke Skywalker) and Anthony Daniels (C-3P0) reprising their on-screen roles, this official radio adaptation features all the sound effects and music you'd expect, and many scenes that did not make it into the final film.

Imagine if Star Wars was longer with more of Luke's story, more of Leia's journey, and just more original Star Wars! You can chose between two different art styles...light side or dark side. Each comes with 2 Topps collector cards and some extra bonus material including vintage commercials and a making-of documentary. Visit the HighBridge Audio site here to order! 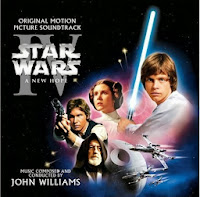 If you've got a young music lover to shop for, consider any (or all!) of the 6 Star Wars soundtrack CDs each with fantastic and memorable scores by John Williams!

More recommendations to come including MANY Star Wars books, toys, clothes & more!
Posted by Star Wars Kidscast at 12:06 AM No comments:

Read, You Must: Draw Star Wars: The Clone Wars 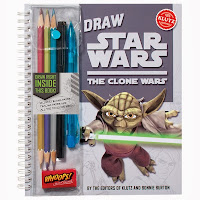 If you're a young artist and fan of the the (sadly) now-cancelled The Clone Wars TV series, this spiral-bound activity book is for you. With illustrations by Star Wars artist Grant Gould and witty instructions by "the editors of Klutz" and Bonnie Burton this is a fun way to practice using basic art concepts, figure drawing and polishing your work into clean, professional-looking Clone Wars art.

You may be tempted to just follow the pictures in a book like this, but cheeky side-notes, tips and comments throughout offer an extra layer of fun in what could've been a pretty straightforward instructional book. So even though this is a Klutz book (which usually means more DOING than reading), make sure you stop & read along the way. Even the credits at the back are pretty funny!

The focus here is on drawing full body characters and action poses. You start with stick figures and build from there giving your characters dimension, weight and form. Eventually it moves to details and finished artwork. I would've liked to also see some attention to creating facial expressions and close-up details, like how to do Ahsoka's facial markings correctly or Plo Koon's mask for example. However this is a great place to start and it comes with quality drawing supplies to get you going. Hopefully we'll see a similar Star Wars Rebels drawing book when that show comes out!
Available online or in most book stores!

Publisher's description:
Draw Star Wars®: The Clone Wars™ is packed with tips and techniques, practice space to draw right in the book, and translucent overlays to make you a master of drawing. Start with stick figures, move onto basic shapes, and finish up with the details. Learn to draw 20 different Clone Wars characters. Age Range: 8 and up, Grade Level: 3 and up
Comes With: black marker, 3 double-tipped metallic colored pencils, always-sharp mechanical pencil, eraser

Posted by Star Wars Kidscast at 11:10 AM No comments: