(Warning: this article contains spoilers about Rogue One)


Whether you’re playing with them or making a diorama, there are some characters from Rogue One that unfortunately won’t be available officially in Rogue One action figure form anytime soon. But don't let that stop your fun!

Rogue One is filled with exciting new characters that already feel like they important parts of the Star Wars saga, but it also has brief appearances by many other familiar faces longtime fans will recognize.

In the first part of this article we looked at a few key characters like Tarkin, Mon Mothma & Leia and our tips for the best and easiest-to-find action figure versions of them. 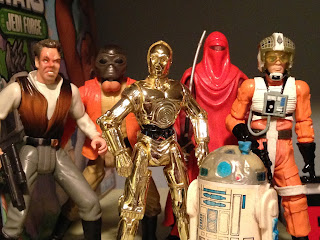 Here’s a few more Rogue One characters you won’t see on pegs in regular toy departments anytime soon but with a little hunting online or at local collectible shops should be fairly easy to add to your collection:


Dr. Evazan and Ponda Baba infamously picked a fight with the wrong Tatooine farmboy in Episode 4 and proved Obi-Wan correct in his statement that the cantina could “get a little rough”. They are on screen only briefly in Rogue One but again they seem to be looking for trouble, this time in Jedha City.
There have been a few versions of Dr. Evazan made over the years starting with the first version back in 1997 while Ponda Baba has been a Star Wars action figure since 1978. Originally, he was named “Walrus Man” by Kenner back then (older fans will still call him that!) and has been recreated several times since.
One of the easiest ways to get both characters would be to find Hasbro's 1997 Cantina Showdown 3-pack that includes Dr. Evazan, Ponda Baba and an action-ready Obi-Wan Kenobi. Despite being produced 20 years ago, this set is still fairly easy to locate and not particularly expensive. Otherwise, loose versions of both characters are also fairly common.
Although they never say a word onscreen in Star Wars movies, the Emperor’s Royal Guards are still an imposing sight in their solid red armor and robes. In Rogue One, the guards are doing what they do best – guarding Darth Vader while he is inside his healing chamber.
The original 1983 Kenner Emperor’s Royal Guard figure (shown here) is still fairly easy to find but so are the later versions, including the 2005 Revenge of the Sith edition. Every version of these guards is pretty good, so it may come down to if you want a cloth or rubber robe, or simply whatever you can find at a reasonable price.
Another character to debut onscreen in 1977 but not made into an action figure until much later is John “Dutch” Vander, aka Red Leader. Most recently he was part of Hasbro’s Black Series toy line. He didn’t get to do a lot in Rogue One but for longtime fans seeing him back on the big screen – even momentarily - was reason to celebrate!
It wouldn’t be Star Wars without the beloved droid duo of R2-D2 and C-3PO showing up somewhere, and in Rogue One they appear for just a moment on Yavin 4 before the big battle. Both characters have been made as action figures many times over, starting in 1978, and are usually widely available.
With the exception of the Episode 1 and 2 versions, and a red arm for his The Force Awakens edition, C-3PO figures usually look pretty much the same as in Rogue One. R2-D2 has had many versions that highlight specific features and gadgets he uses but again, they all pretty much work for Rogue One play.
Although the C-3PO isn't nearly as shiny as other versions, one of the easiest ways to get both droid characters would be the 2014 "Mission Series" 2-pack (seen here).
There’s no wrong way to play Star Wars so use whoever and whatever you can find to recreate Jedha in a dirt pile or Scarif on your next visit to a beach. Have fun and, as always, may the Force be with you!
Got a favourite character from Rogue One you’d like to see Hasbro make? Comment below!
Posted by Star Wars Kidscast at 11:15 PM No comments:

In 2017 there are still many unanswered questions about Anakin Skywalker, but 40 years ago young minds were blown by this terrifying but engrossing new villain!

Between 1977 and 1980, with only one Star Wars movie to discuss, fans weren’t even sure if he was human! Kids and adults alike argued over whether or not Darth Vader was a droid. Even Obi-Wan in A New Hope says of Vader “He’s more machine now, than man,” fueling the hotly debated topic!
The fact that Darth Vader actually was Anakin Skywalker wasn’t solidified until 1983 but that then raised many more questions. The prequel movies of Episodes 1 -3 (1999 – 2005) focused on Anakin’s fall the Dark Side and the rise of the Empire, and finally clarified much of Vader’s story.

As time goes on and new Star Wars TV shows, comics and of course movies come out, more and more periods of Anakin/Vader’s life become revealed. Learning about all these events means a lot of reading and watching which may not always be age-appropriate for all fans. 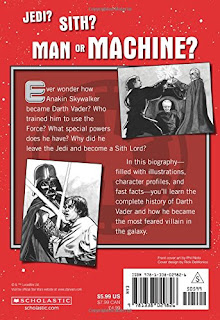 Star Wars Backstories Darth Vader: Sith Lord is a brand new biography from Scholastic Press of the legendary Dark Lord of the Sith. In a middle-grade paperback format, the book gathers the life story of young Anakin, from childhood slavery to his heroic days as Jedi Knight. In 128 pages it continues with Anakin’s fall to the Dark Side of the Force and life as fearsome servant of the Emperor, Darth Vader.

Considering how little is known about some characters (what was Luke’s life like before A New Hope, or between Return of the Jedi and The Force Awakens? Or the hundreds of years of mystery in Yoda’s past?), Anakin/Vader’s story is pretty well told through the Star Wars saga. This book brings most of it together in one place.

Chapter by chapter, author Jason Fry chronologically tells the known story of Vader. This includes not only the information given in Star Wars movies, but also covers major events from The Clone Wars, Star Wars Rebels and Marvel comic books. Along the way, the gory details are spared, but the book never tries to pretend Vader was anything but a villain. Anakin’s downfall and Vader’s evil deeds are here, but presented appropriately for middle-grade readers. Many wonderful black-and-white illustrations by Randy Martinez highlight the key moments, with additional artwork by Rick Burchett and cover art by Phil Noto.

Scholastic’s Backstories series began featuring Star Wars characters for the first time with the terrific Princess Leia: Royal Rebel last year. Hopefully these books will continue as they are great for young readers who may want to know the major moments of a Star Wars character’s story but not have access to all the TV episodes or are not ready for Teen-rated comics.

Jason Fry is possibly the most prolific Star Wars author with many wonderful books to his credit: Weapon of a Jedi, Aliens of the Galaxy, Rey’s Survival Guide, the Servants of the Empire series, and many more! Once again Fry shows his love of Star Wars and his talent for telling it well.

In Darth Vader: Sith Lord, Fry begins the book with a foreword “by Darth Vader” which solidifies Vader's belief that he was “born” when Anakin “died”, a notion that Luke never totally believed. It may have been interesting to keep the book going as if it were written by Vader himself, but it’s hard to imagine the Dark Lord sitting down to write his memoirs. It’s probably for the best that it was done the way it was.

For die-hard, read-everything fans Darth Vader: Sith Lord may have few surprises but it is a well-written, well-illustrated recap of just about everything we know about one of the most tragic stories in all of Star Wars.

Also highly recommended if you can find it: The Rise and Fall of Darth Vader by Ryder Windham (Scholastic 2008)
Posted by Star Wars Kidscast at 10:00 PM No comments:

Read, and Listen, You Must: Star Wars Read-Along books! 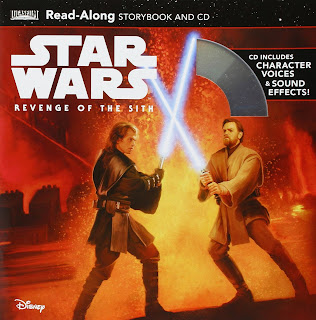 "The circle is now complete!"

With the recent release of Revenge of the Sith, the Star Wars Read-Along Storybook and CD series has adaptions of all seven Star Wars “episodic” movies now available.

Each movie title is condensed into a 32-page storybook, full of brand-new illustrations, displayed nicely in the popular 8 x 8 picture book format. The accompanying CD is the same version of the story told through narration, sound effects, music and even dialogue from the movies. They are a lot of fun and a whole new way to experience the stories. 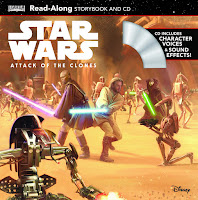 All of the books contain beautiful new artwork from the digital painting master Brian Rood. His art is also in many other recent Star Wars books, especially The Force Awakens storybook and Star Wars: The Original Trilogy Stories.

Released in a somewhat strange order, the new Star Wars Read-Along series has finally completed the “saga” (no plans for a Rogue One book set announced yet).  Starting in 2015 they were released in the same order the movies were: A New Hope, The Empire Strikes Back and Return of the Jedi. Shortly after the film release of The Force Awakens, that movie’s Read-Along book set came out in spring 2016. 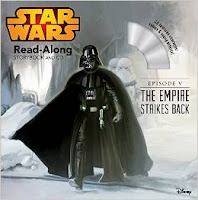 Starting in January 2017, the prequel trilogy editions were released, completing the series of the first seven “episode” movies, otherwise known as the Skywalker saga.

This isn’t the first series of Star Wars Read-Along books but is the first time for most the movies in this format. In the 1970’s and 80’s there were book-and-record read-along versions of the original trilogy, as well as several other Star Wars read-along books based on the Ewoks adventures or issues of the original Marvel comics. Many of these were later available with a cassette instead of a vinyl record. 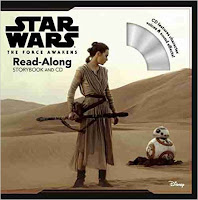 Then in 1997 new adaptions of A New Hope, Empire Strikes Back and Return of the Jedi were created to tie into better with the new material added for the "Special Edition" re-releases of the films. In 1999 a read-along book and CD set was also created for The Phantom Menace.

With this series there are some re-used elements from the past, but most of it is new to enjoy. The first three “original trilogy” releases have the same text and audio as the 1997 versions (then illustrated with photos) though this appears to be the first time the audio is available on CD. However for this series The Phantom Menace, Attack of the Clones, Revenge of the Sith and The Force Awakens are all-new retellings of the films, with new art and new audio presentations. 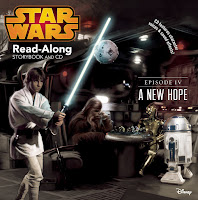 The new adaption books are all written by Elizabeth Schaefer (author of Rey’s Story and The Force Awakens storybook) and the re-released ones were adapted by Randy Thornton. The authors pull off the tricky balance of keeping the story flowing and exciting while also keeping the vocabulary and content age-appropriate for young readers (or read-alongers?), only subtly acknowledging the more grizzly moments, especially in Revenge of the Sith.

Whether you sit down to enjoy these books along with the CD, or enjoy the CD and books separately (I happen to really enjoy just listening in the car), the Star Wars Read-Along books are a wonderful series and entertaining way for young fans to enjoy the stories again and again. Looking forward to a read-along The Last Jedi, hopefully soon!

Posted by Star Wars Kidscast at 10:19 AM No comments: