Star Wars began as an American movie, filmed mostly in the UK, with mostly American & British cast, crew and everything else.

Mostly, but not all. A few of us Canadians sneak in there now and then too!

If you follow our Twitter @SWKidscast or facebook @StarWarsKidscast accounts (please do if you don't already!) you may already know this. Over the past week or so we've been celebrating one Canadian contribution to Star Wars each day as we count down to Canada Day (July 1).

There are far more notable Canadian contributors than we realized and should've started this much earlier! However, there's always next year. And please let us know if we missed somebody! And use the hashtag #StarWarsEh

Here's a recap of week one of our celebration...


Posted by Star Wars Kidscast at 9:47 AM No comments: 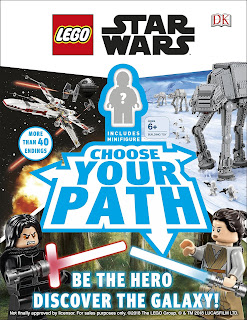 "Be the Hero, Discover the Galaxy!"

From the first page readers make a choice about what era of Star Wars they wish to explore in their adventure.

The storyline choices are:

What follows is 120+ pages of full-colour LEGO Star Wars fun and a decision to make on each page. Like with other books with this story format (check out the recent Choose Your Destiny: Han & Chewie Adventure), decisions can certainly have dire consequences, or happy endings! There are more than 40 potential endings, and many ways to get there.

Your personal guide for this adventure is a silver protocol droid named U-3PO who will accompany the adventure for whichever storyline is chosen. There is also a glossary at the back for better understanding some of the uniquely Star Wars vocabulary words. 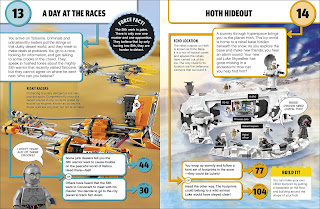 LEGO Star Wars: Choose Your Path is generally lighthearted and fun like most LEGO Star Wars books, games & shows. Some things happen a bit differently in the LEGO Star Wars galaxy than in the movies.

Although this book includes connections to the The Clone Wars and Star Wars Rebels characters, surprisingly there seems to be no inclusion of the Freemakers from the LEGO Star Wars The Freemaker Adventures TV show. 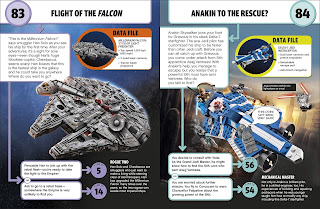 If you've never read this type of book before, the experience itself of flipping from one section to the next - all over the book - can feel like a wild goose chase itself. Reading a book structured this way is like more like playing a game than reading a novel.

It's an entertaining "game", but the back cover puts it a little more seriously though: "The fate of the galaxy is in your hands! Which path will you choose?"

Choose your path & have some fun with this book.

Read, You Must: The Mighty Chewbacca in the Forest of Fear! 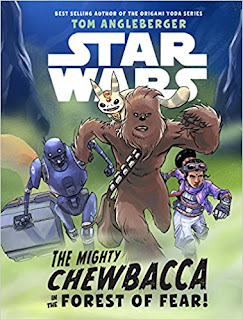 Author Tom Angleberger returns to the galaxy far, far away with an exciting and entertaining adventure novel The Mighty Chewbacca in the Forest of Fear!

Longtime readers of this blog know how much we love his best-selling Origami Yoda series of books. He has also written a young reader adaption of Return of the Jedi entitled Beware the Power of the Dark Side! We even had a chance to talk to him on our podcast a few years back.

Fear not! Despite the creepy title, fans of Angelberger's humour will not be disappointed with the The Mighty Chewbacca in the Forest of Fear!, and his love of the entire Star Wars galaxy shines here too.

Set between the events of the movies Solo and Rogue One, this 261-page middle-grade novel from Disney/Lucasfilm Press sends the beloved wookiee on a high-paying job that seems to good to be true. Turns out it's all a trick to accomplish a very dangerous mission for powerful, dishonest people.

Chewbacca is separated from Han Solo and unwittingly teamed up with Rogue One's K-2SO, a young adventurer named Mayv, and a shipload of tookas - cat-like creatures seen in The Clone Wars and Star Wars Rebels. What starts as an easy mission quickly becomes a run-for-your-life nightmare of creatures, bigger creatures, and then insanely big creatures!

Everyone seems to have a hidden agenda here, except for the mighty Chewbacca of course, and even those who seem to be working together have secret plans they hide from the team.

While this is really Chewbacca's story, most of the laughs come from the droid K-2SO with his deadpan commentary and inability (or unwillingness) to comprehend the behaviour of living things. Although Han Solo isn't the star here, fans will enjoy his part in the story and Rogue One's Cassian Andor is also key to this tale.

Many authors of Star Wars books have faced the challenge of how to reproduce Chewbacca's "talking" on a written page. Wookiee-speak, or "Shyriiwook", is very difficult to spell for readers! This is probably the main reason there have been very few books focusing on the beloved character over the past 40 years!

Angelberger has found a fun approach, making the narrator a central figure who speaks directly to the reader. He not only translates Chewie's many different growls and roars but also sneakily shares story details along the way. At times the reader knows more, sometimes much more, than the characters which helps build the excitement as they are about to get themselves in further trouble!

Fans of the recent Adventures in Wild Space series, or the classic Galaxy of Fear novels from the 1990's, will certainly appreciate the creepy chills and thrills hiding around every corner, or lurking in the next tree. The young team-member Mayv has to conquer terrors along the way that don't frighten wookiees (dangerous heights) or droids (hungry snarlers) and complete the mission for her own reasons.

The book contains a few exciting two-tone illustrations by Andie Tong, usually depicting the heroes of the story in escalating peril! The images leave the reader wishing there were just a couple of more pictures to enjoy along the way.

For those looking for connections to the Solo movie (this book was released in conjunction with the movie) the terrifying "snarlers" appear to be the same creatures referred to as Corellian Hounds, introduced onscreen in the early scenes in Solo.

If you're looking for a fun, exciting, funny, and occasionally scary adventure, The Mighty Chewbacca in the Forest of Fear! is certainly the book for you!
Highly recommended!


Posted by Star Wars Kidscast at 11:46 AM No comments:

Read, You Must: Solo The Official Guide 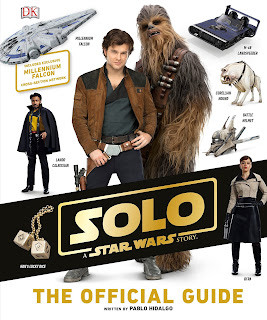 While the movie is still only available to see in a theatre, these books are the next best thing to being able to pause the movie and scrutinize the fascinating little details that go by too quickly.

Lucasfilm's Pablo Hidalgo (The Last Jedi: The Visual Dictionary, Rogue One: The Ultimate Visual Guide) takes readers on a 128 page tour of the brand-new locations and locals from the movie while noting links to the Star Wars we already know and love.

For fans young and old, Solo: A Star Wars Story is a movie bursting with connections to other movies, TV shows, comics and books. As Han travels from planet to planet across the galaxy, his adventures link up to all sorts of trivia for fans. Some of the connections are to places and things in books published over 30 years ago, while others refer to details mentioned in The Clone Wars and Star Wars Rebels. 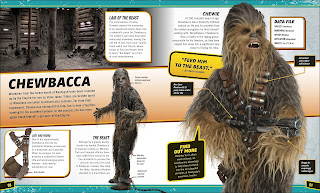 Like previous "Visual Guide" and "Visual Dictionary" books, Solo: The Official Guide is page after page of colourful photos from the movie along with descriptions and context for each droid, alien, and just about everything else.

At the back there is also a cool section of behind-the-scenes artwork, photos and info for fans interested in the movie-making process. 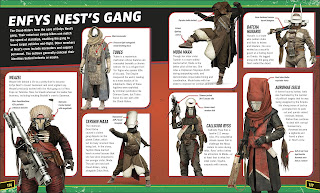 Solo: A Star Wars Story The Official Guide is a wonderful companion to the film. It does share an unfortunate trait though with similar Star Wars reference books from the past. As these books are released simultaneously with the film, but published and distributed beforehand, there are always major moments of the film that for secrecy's sake don't end up in the book. For Solo, these come in the form of character reveals that, once you've seen the film, pose a lot more questions than are answered on-screen.

For example, it would've been wonderful to have an image of the Cloud-Riders with their helmets off, as they eventually are seen in the movie, along with more detailed info about them.

There's another example late in the movie that certainly begs for elaboration but we'll leave that one for another time...

Like with previous guide books, it's a small price to pay to have such a photo-rich, detail-filled book to pour through between viewings of the movie, and gives readers new things to look for each time. 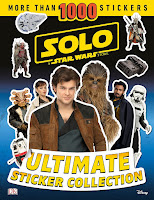 Posted by Star Wars Kidscast at 9:52 PM No comments: