Choose Your Destiny: The Choice is Yours! 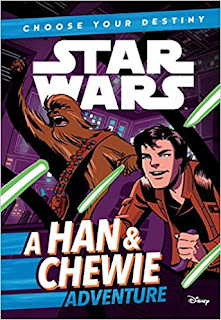 Would you like to be able to decide the fate of Han Solo and Chewbacca? How about make the decisions for the crew of the Millennium Falcon?

A new book series from Lucasfilm/Disney Press not only allows young readers to do that sort of thing, but the first book also gives a new glimpse of the relationship of Han Solo and Chewbacca before they meet Luke Skywalker and Princess Leia.
Choose Your Destiny: A Han & Chewie Adventure is the first in a series of (hopefully many) new Star Wars books that flow with multiple story paths and outcomes based on the choices of the reader.
Author Cavan Scott (from the Adventures in Wild Space series) provides the optional storylines over 122 pages, with artwork by Elsa Charretier (Star Wars Adventures) along the way.
This is the first of many new Han Solo-focused new books coming soon as excitement builds for the upcoming film Solo: A Star Wars Story.
Longtime Star Wars readers may remember previous book series’ with a similar adventure-choosing format. Some of them can still be found in used book stores and online. 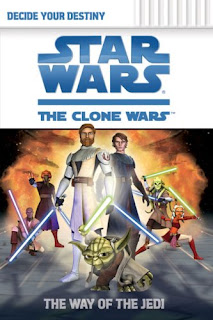 Back in 2008-2010 a series of The Clone Wars books had a similar structure for self-determined readers. “Decide Your Destiny” was the series name for these five books, starting with The Way of the Jedi and ending with Dooku’s Secret Army. These adventures were connected to the events of the animated series, but of course could end up being very different based on reader’s choices!

Even further back, in 1998 “Choose Your Own Star Wars Adventure” was a set of three books based on A New Hope, The Empire Strikes Back and Return of the Jedi. If you can remember a time when there were only three Star Wars movies, you may remember these books. “You control the twists, turns, and outcomes of the most exciting adventure in the galaxy,” the books promised.

Whatever Star Wars books you choose, may the Force be with you!
Posted by Star Wars Kidscast at 9:35 PM No comments:

Read, You Must: Encyclopedia of Starfighters and Other Vehicles 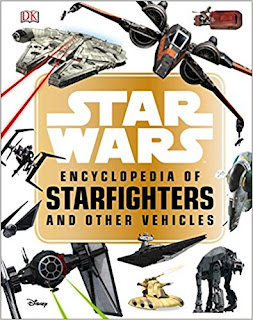 I must admit that the spaceships are not my favourite part of Star Wars. While I completely appreciate them on screen, and especially in toy form, I've never gotten particularly excited about the vehicles.

For me Star Wars is so much about the characters - and especially the aliens! For a 208-page book specifically about vehicles to keep me engaged like Encyclopedia of Starfighters and Other Vehicles has, that's really impressive! Certainly I can see readers referring back to this one many times.

Written by Landry Q. Walker (author of the very entertaining Star Wars Aliens Volume 1 and writer for the Star Wars Adventures comics), this book is similar to DK's Encyclopedia of Characters in many ways.

Encyclopedia of Starfighters gives one full-colour, individual fact-sheet for about 200 Star Wars vehicles. Whether they are pivotal to the Star Wars Saga like Millennium Falcon or the Death Star, or very obscure “blink-and-you-miss-it” background ships, everything is equal here. Each page has several images and details about the ship plus how they fit into the story.

The title is a little misleading as there seem to be just as many cargo ships, transporters, walkers, tanks, boats, frigates, cruisers, speeders, skiffs and just about everything else as there are starfighters. Starfighters is probably a more exciting word than "transports" though. 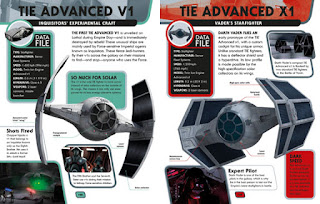 The book contains vehicles from Episodes 1 - 8, plus Rogue One, The Clone Wars and Star Wars Rebels, all side-by-side. It's a great recent trend when books like this treat the saga as a whole, and weighing the animated shows equally with the movies.


Encyclopedia of Starfighters is divided into sections on Air, Land, Water, and of course Space vehicles, which is the largest section by far. Some of the ships are very well known while others may have only been in one episode of a TV show. Usually from the pictures it's clear what movie an image is from but I would've appreciated something like "First seen in The Clone Wars Season 2 Episode..." on a few of them. 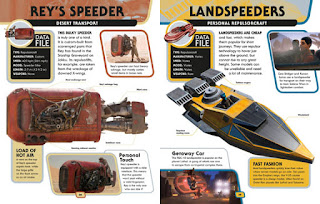 Among all the images and information, author Landry Walker has fun with some of the section headings with puns like "Maul Aboard", "Soulless Asylum" (ask your parents) and "End over Endor", or cheeky references to movies like "Ion Giant, "Fast and Furious", the 1902 silent film "Trip to the Moon" and at least one reference to Top Gun. Fans of Star Wars Rebels will appreciate why the threatening Clone Wars-era AT-TE walker is referred to as a "Retirement Home".

One enjoyable nugget that jumped out for this 80's kid was the expansion of the story of Kanan Jarrus' Joben T-85 Speeder. In Adam Bray's 2014 Star Wars Rebels The Visual Guide, the name Joben seemed to be a reference to the racing character Thall Joben from the 1985 Star Wars cartoon series Droids. Here that is confirmed and elaborated on that the bike is indeed "named for famous swoop racer Thall Joben".

There's probably more fun for keen-eyed fans to discover too! 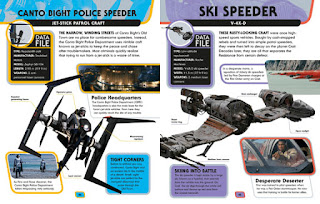 There is one design oddity that jumped out: on the page for the infamous Slave-1, the ship is rightly attributed to Jango Fett, then to Boba Fett but here Boba is only briefly mentioned and neither Fett is pictured. Instead, the pirate Hondo Ohnaka is pictured with a reference to one time he "borrowed" the ship. A picture of Jango and young Boba sitting together in the cockpit would've made much more sense here. Hondo fans will be happy though! 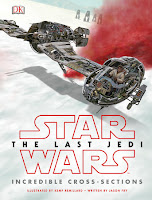 The Star Wars Encyclopedia of Starfighters is highly recommended for fans wanting a quick overview of many vehicles in an easily accessible format. If you’re looking for further details, you’ll also want to dive into books like the Incredible Cross-Sections series (also from DK).