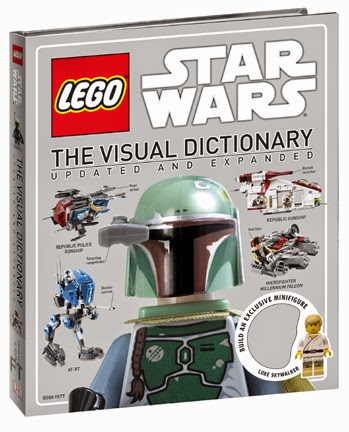 LEGO Star Wars: The Visual Dictionary takes a detailed look at the characters, creatures, playsets, vehicles and almost everything else in the LEGO Star Wars toy line. “Updated and Expanded” from the 2009 edition, this hardcover guide adds five years (and 48 pages) of new LEGO fun!


Back when the first version was written, The Clone Wars TV series was still just getting started and there hadn’t been any LEGO Star Wars TV specials yet. The many tie-in sets for those series’ alone are worth updating the book but this also covers the many exclusive minifigures, the “microfighter” line, the popular annual Advent Calendar pieces (introduced in 2011), the massive “Ultimate Collector Sets” and more.


Since 2009 many of the LEGO Star Wars sets have been redone, like Jabba’s Palace, so you get to compare both through information and detailed photos. Then there's full spreads of some of the all-new sets like the Ewok village... 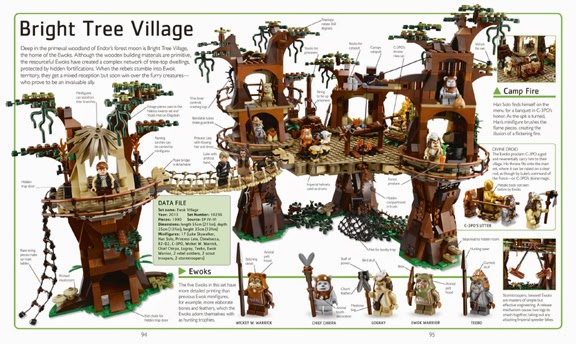 Keeping with the “updating” theme of the book, the exclusive minifigure Luke Skywalker is a brand-new updated take on the first 1999 Luke minifig. Luke’s minifig “skin” has been pink since around 2006 but this one has trademark LEGO yellow hands and head as Luke did in 1999.

In this book you also get behind-the-scenes interviews with LEGO creators and a comprehensive timeline of when each set was released. Simon Beecroft and Jason Fry wrote this with trivia-loving LEGO enthusiasts in mind but works for a casual fan who can just appreciate LEGO’s fun take on Star Wars. 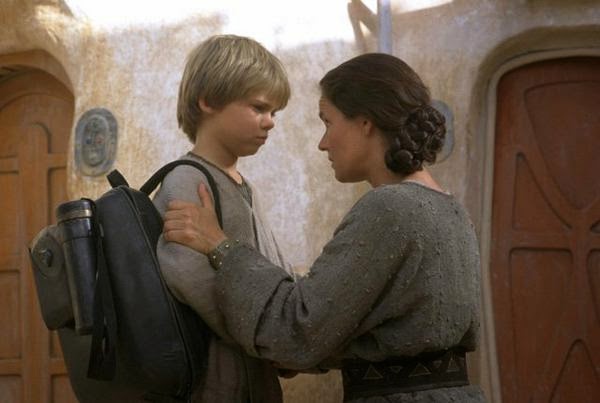 Join Star Wars Kidscast for a Mother’s Day Special episode! Four active Star Wars fans (who also happen to be moms) chime in on characters like Shmi Skywalker & Padmé Amidala, what Star Wars means to them as moms, how they share the saga in their family and much more!

Also check out this earlier episode with an interview with Star Wars artist (and mom) Katie Cook, along with her youngest youngling! 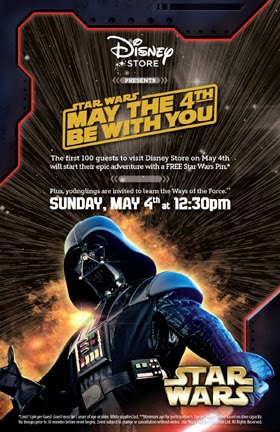 May the 4th, 2014 was a lot of fun in Surrey, BC. This year we had to CHOOSE between the many events happening! It was so cool to see so many fans young and (ahem) not-so-young celebrating Star Wars.

Our first stop was the local Disney Store.

We were one of the last few "first 100" customers so we manage received a free Star Wars pin commemorating the day.

Disney Store hosted Jedi Training which entailed a cast member (Disney doesn't have "staff") interacting with a Star Wars video to walk kids through various training exercises. The kids all received inflatable mini-lightsabers, paper medals of honor (just like at the end of Episode IV: A New Hope) and also a pack of trading cards afterward.


The cast members were great, the kids had fun and Disney Store truly got into the Star Wars spirit! 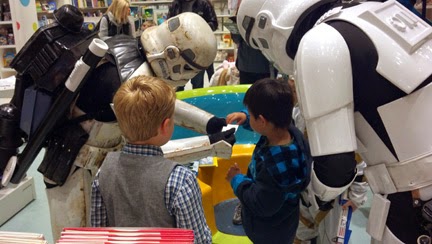 Next stop was Indigo Books which had Stormtroopers interacting with the customers, some trivia challenges for the kids and a few fun giveaways too courtesy of DK Publishing and LEGO.

More kids were there in costume for this event including some Clone Troopers and a little Darth Vader. Some of the staff were even dressed up or sporting Princess Leia's infamous hair buns!


What was so great about May the 4th/Star Wars Day was even though both events were aimed at kids the parents seemed to be having just as much fun. Both events had many parents in various Star Wars T-shirts too. Star Wars had its Dark Side of course, but May the 4th was a positive celebration of the Galaxy loved by all ages. 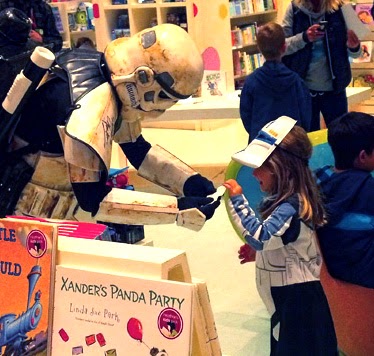 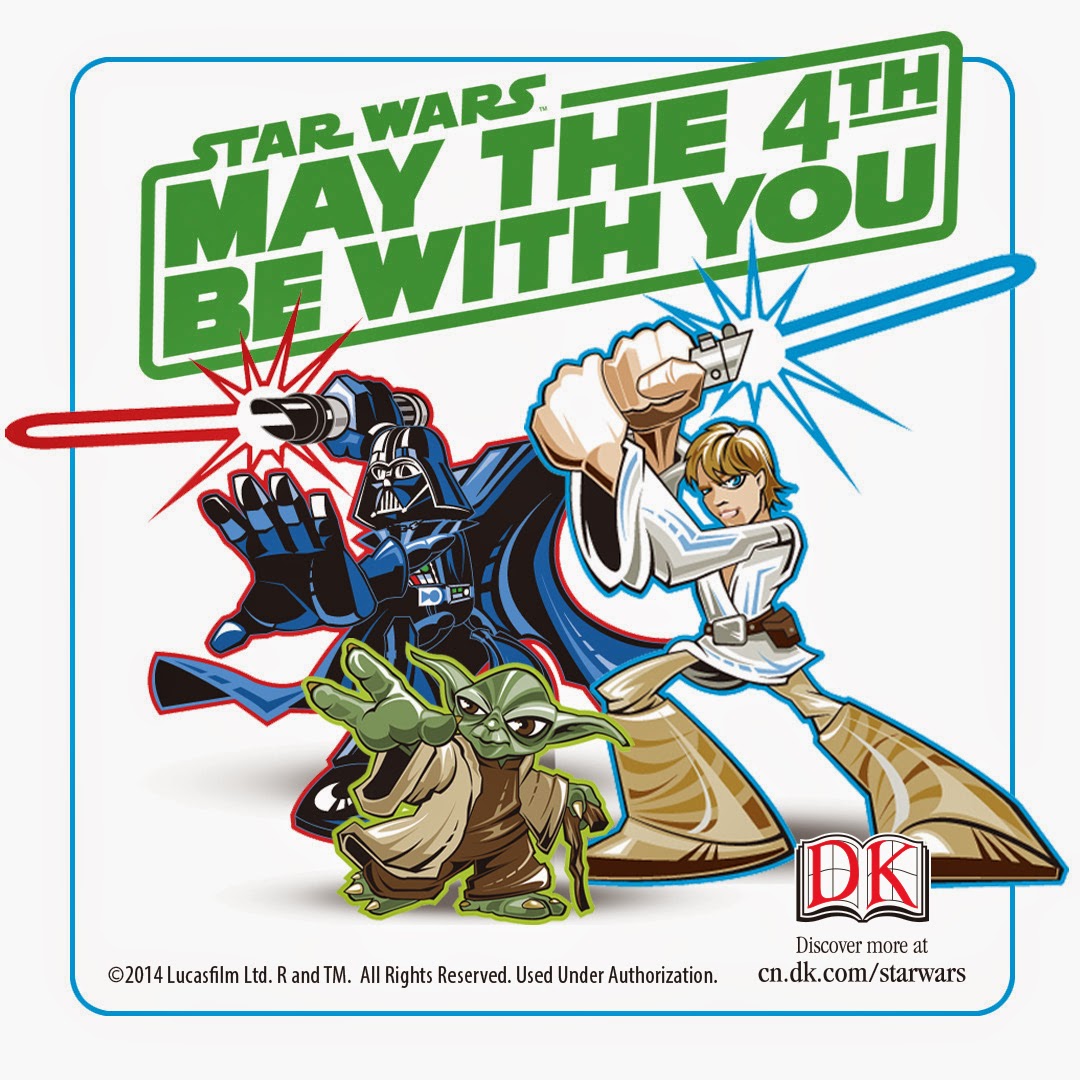 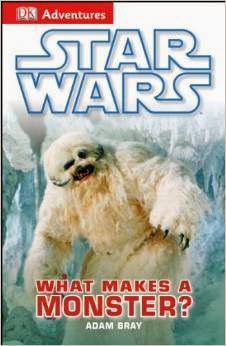 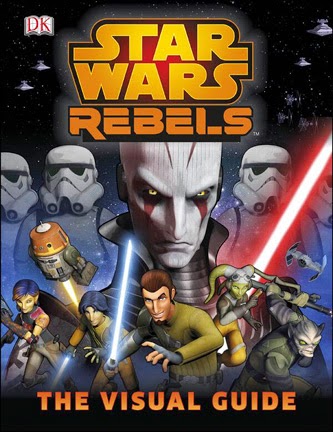 How do you go from writing real-world travel guides to writing a Star Wars book for kids about MONSTERS?
On the eve of May the 4th join us for a chat with Star Wars: What Makes a Monster? author Adam Bray as we discuss his many overseas adventures as a travel writer and his take on Star Wars worlds and creatures. Plus news & other fun stuff, Star Wars Kidscast style!

And here's the Star Wars Kidscast review of Star Wars: What Makes a Monster?


Update: Unfortunately we couldn't discuss it a few days ago but now it's official, Adam Bray is also the author of the upcoming Star Wars Rebels: The Visual Guide (DK Publishing) coming out later this year!