Read, You Must: Ahsoka 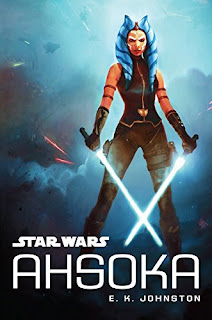 What happened to Ahsoka?

Fans of The Clone Wars TV series were left wondering what happened to Anakin Skywalker’s apprentice Ahsoka Tano ever since her unceremonious departure from the Jedi Order at the end of Season 5.

There were more planned stories involving the skilled, young Togruta but the show was (also unceremoniously) cancelled before those and the rest of the tales bridging Episode II and III could be told.

Viewers were speculating if she’d turn to the Dark Side, if she’d disappear entirely, or if she could somehow come back to face Anakin. Little did she know about HIS future!

When Star Wars Rebels re-introduced Ahsoka at the end of Season 1 she was a mature Rebel leader, far more serious than she’d been years earlier.

So what happened to her in those 14 or so years in between The Clone Wars and Star Wars Rebels?

Author E.K. Johnston (A Thousand Nights, The Story of Owen) and Disney/Lucasfilm Publishing takes Star Wars into the world of Young Adult (YA) fiction for a second time with Star Wars: Ahsoka and answer many of those burning questions.

Ahsoka tells the story of the former Jedi on the run from Empire. When the book begins Order 66 has already happened, the Republic has become the Empire and the Jedi Order is widely considered traitorous and dangerous.

It is a dark time when it was not safe at all to use the Force in public, let alone wield a lightsaber (or two).  Moving from town to town, planet to planet, Ahsoka must hide her true identity or be hunted by Imperials. She adopts the name Ashla and befriends a local farmers on the planet Raada.

As the Empire’s control of Raada grows, “Ashla” must decide if she can help the locals or if her presence puts everyone in danger. Does doing the right thing mean running away? Ahsoka’s conscience conflicts with her Jedi training here but nothing could’ve prepared her for the heartless acts of the Empire.

The story builds in steps as Ahsoka builds her new life. It starts somewhat slowly with her getting her bearings on a new planet, making new friends and even setting herself up a fix-it shop for droids and equipment. As she learns more about the Empire’s dealings on Raada she knows she cannot sit idly by. She’s no longer officially a Jedi but the Jedi code is deep within her so of course she fights the Empire - but not without cost.


The pace picks up throughout the book and the story ends with plenty of dramatic Star Wars action. It also sets up the Ahsoka we see in Star Wars Rebels very well.


Like Claudia Gray’s Lost Stars, Ahsoka is accessible to fans of a wide age range but written primarily with "young adult" (aka teen) readers in mind. There is nothing particularly inappropriate for younger readers here but the slow build may not be of interest to some younglings.

Ahsoka fans of any age will find satisfactory answers to many of their bigger questions of what happened to her between The Clone Wars and Rebels in Ahsoka.

Now if we could just get a book like this about Rey….please!