Jedi Academy: A New Class and a New Beginning 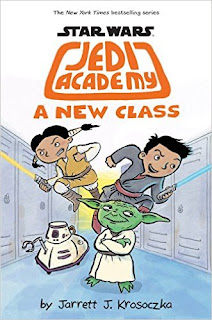 The fourth book in the Jedi Academy series is full of “new” stuff indeed.

Krosoczka’s art and writing styles are different than Brown’s but he does keep the look somewhat consistent with the earlier books. He is clearly a very talented visual storyteller and it will be nice to see him make this series even more his own if he continues with it.


A New Class focuses on a brand new main character so it really is a new start to the series.
For those who are unfamiliar with the Jedi Academy series the books are middle-grade, thoroughly-illustrated novels “told” by a young Jedi student. Imagine a Diary of a Wimpy Kid–type book in Star Wars.
This series is an alternate take on Star Wars where the Jedi are not a serious, monk-like order of Masters and Apprentices. Instead, this is a North American middle-school set in space with a lot of Star Wars puns and jokes throughout. One example, in the movies the Jedi are forbidden to have personal attachments to other people (a crucial story point made over and over) but in the Jedi Academy world, the students have mixed-gender dances, have dates, crushes and even fly home frequently to see their families! So basically you need to disregard everything you know about the Jedi Order or George Lucas’ vision of Star Wars to enjoy these books.

A New Class begins the tale of Victor Starspeeder, a likeable young Jedi student transferring from another school to the Jedi Academy on Coruscant. In his first year there he meets a few new friends, discovers he has some talent that helps the drama club and has to learn a few lessons along the way with the help of his big sister, a fellow Jedi student. The bigger issues for Victor though are his romantic feelings for a classmate and his unfortunate choice of friendships. Everything builds towards – nope, not a lightsaber battle – nope, not a space battle – the big school play at the end of the year! The drama here is literally about drama! 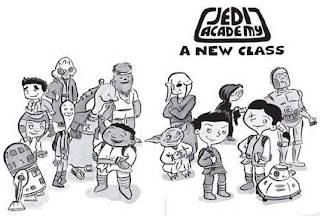 Along the way are field trips to Endor (the Ewoks’ home moon), food fights, lightsaber training and more. Long-time Star Wars fans will appreciate the dangerous encounter with a Gorax, a creature that debuted in the Ewoks TV movie Caravan of Courage back in 1984! There’s also comic strips throughout parodying Garfield, Peanuts and Family Circus. While only a small portion of the book, there also is a very positive depiction of step-parenting in A New Class, with the character of Russell.

Jeffrey Brown’s three Jedi Academy books were filled with gags on the theme of putting modern Earth things into Star Wars for a laugh. Jarrett Krosoczka uses far less of that type of humour but it’s still there for readers who enjoy that. For the rest there’s a fast-paced story of a young boy trying to fit in.

Since A New Class begins a brand new storyline in the school, readers could easily start here. It’s not vital to have read the first three books in this series before enjoying this one but books 1 – 3 should be read in that order.