Read, You Must: Star Wars Aliens Volume I 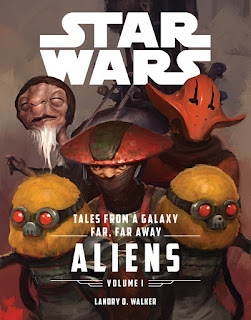 Why is Unkar Plutt so grouchy? Who are those two guys that Finn almost leaves with? Who’s that little guy waiting behind Rey in Niima Outpost? A new middle-grade book from Disney-Lucasfilm Press gives us a much closer look at many of the interesting-looking new alien characters from The Force Awakens.

Somehow this collection of short stories got the longest title of any book in recent memory. The full title is: Star Wars: Tales from a Galaxy Far, Far Away ALIENS Volume I (we’ll just call it ALIENS Vol. I for short here). The inclusion of “Volume I” is interesting and suggests more to come, hopefully soon!

In 346 pages, author Landry Q. Walker gives us six stories focusing on six different alien characters. Each tale also has a great painting by Tyler Scarlet. Two of the stories are brand new while the other four have been available only as eBooks until this hardcover release.

The stories vary in length, tone and genre. Walker really has fun jumping around from Unkar Plutt’s cyber-romance/heist thriller to a crime story/cooking show in Maz Kanata’s castle. Swashbuckling pirates and even mad scientists are all a part of the fun. Crime and criminals is the focus here in this collection of “scum and villainy”. There are a lot of “no-good, double-crossing swindlers” here, as Lando Calrissian might put it.

The stories are not connected at all so they can be enjoyed in any order. They seem to take place before the events of The Force Awakens as Niima Outpost and Maz Kananta’s castle are still intact.

Unfortunately the first story is focused on Constable Zuvio, a character becoming infamous for – despite being made into several toys and featuring in other books – doesn’t seem to be in The Force Awakens at all unless you have an eagle-eye and can freeze your Blu-ray at exactly the right moment. It may be of little interest to read this adventure of a character essentially not in the movie. However Zuvio’s tale is an engaging detective story with a lot of western feel. Columbo in the wild west…in space.

For A New Hope fans, the most intriguing story is Bobbajo’s All Creatures Great and Small – a “tall tale” of his imprisonment with his tiny creatures, on the first Death Star, coincidentally at the same time a certain famous Princess meets two men and a wookiee. The story even suggests that Bobbajo’s creatures played a vital part in the destruction of the Death Star, though Bobbajo is apparently known for stories that are often wildly exaggerated.

Also of interest to longtime Star Wars fans – and this appears to be the first time in the new “canon” (official Star Wars timeline) – is mention of the character of Gormaanda from the infamously bad 1978 Star Wars Holiday Special in the story A Recipe for Death.

ALIENS Vol. I ends with the longest and most exciting tale: The Crimson Corsair and the Lost Treasure of Count Dooku, an adventure of piracy and plundering that escalates to a bigger and bigger clash between rival pirate gangs. The story also has some wonderful connections to the Clone Wars TV series.

Confident young readers will enjoy the variety of stories here and insights into characters only briefly seen on screen. Older Star Wars fans can certainly enjoy these tales too as they are not specifically “children’s” stories – no more than the rest of Star Wars. One story, The Face of Evil, may be a little scary for very young readers.

With so many other background characters and interesting aliens in The Force Awakens to learn about, this book will leave you looking forward to Aliens Vol. II!
Publisher's Recommendation: Ages 8+
For more short stories set around The Force Awakens characters read Before the Awakening.

Posted by Star Wars Kidscast at 8:59 AM