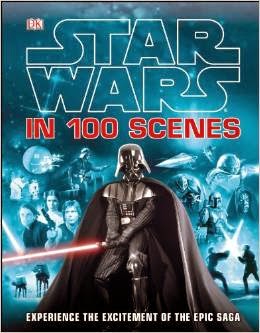 Star Wars In 100 Scenes is a brand new look at the entire Star Wars movie saga (so far) in one hefty, photo-filled volume from DK Publishing.

The six movies are broken down into a series of two-page spreads highlighting key moments, character introductions and a little behind-the-scenes trivia. The storyline is summarized scene-by-scene by author Jason Fry (Star Wars: The Clone Wars Episode Guide, Jupiter Pirates) as he offers insights gathered from the movies, books, comics and other sources. It is more of a guide book than Fry’s 2011 Star Wars: The Complete Saga (Scholastic), which told the same story but in a much more illustrated storybook way.


The images are stunning of course, and every page is FULL of pictures. Like many other photo-rich DK books, moments that quickly go by on screen are frozen here and allow you to notice details you may have missed no matter how many times you see the movies.

Star Wars in 100 Scenes is written to be appropriate for 7-15 year-olds but fans of any age, including adults, would get something out of this.


The emphasis is on action and excitement, as the cover suggests: “Experience the Excitement of the Epic Saga”. Among the 100 exciting scenes highlighted there are some notably absent character and story moments. For example, Anakin meeting Padmé for the first time is never mentioned or shown (pretty vital to the entire overall story) nor is Han Solo’s encounter with Greedo in the Mos Eisley cantina. Understandably, boiling the six films down into 100 scenes meant that some scenes would not make it in. I’m sure there were many debates before the 100 were chosen.

This is a gorgeous book that belongs on any Star Wars fans’ bookshelf. However the best use for this book may be this: if you have a friend or relative who isn’t willing or able to sit down and watch six whole movies but asks “why do you love Star Wars so much?” hand them a copy of Star Wars In 100 Scenes. You’ll likely create a new fan right there!